Gangs will not lose sleep over new crime measures

Anti-gangland measures helpful, if limited, with no timetable and no money pledged 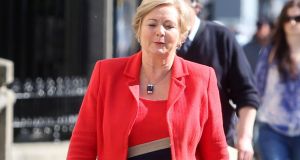 The commitment for new and stronger surveillance powers for the Garda referred to by Frances Fitzgerald sound promising, though detail is needed before any firm conclusion could be reached. Photograph: Sam Boal/Rollingnews.ie

It is difficult to imagine anyone in the criminal fraternity having a troubled sleep last night on the basis of the Government’s anti-gangland package.

It is aimed at bolstering the Garda’s efforts in the fight against organised crime and is a direct response to the climbing death toll in the so-called Kinahan-Hutch feud.

But as reorderings of the criminal justice system go, this is more a tinkering around the very edges than anything root and branch.

No timetable for any of the reforms has been set out and they come as the last batch of Government promises – including the deployment of an armed Regional Support Unit for Dublin – are yet to be honoured.

Crucially, there is no extra money pledged to fund the plans, or to provide the saturation level of policing that had been mooted.

However, the Government has made a generalised pledge the Garda won’t want for resources.

Aside from woolly promises by Minister for Justice Frances Fitzgerald “to meet with” her colleagues from Spain, Belgium and the Netherlands next week on the issue of transnational crime, this package leaves the Kinahan gang untroubled.

The Government said it is moving to strengthen the Criminal Assets Bureau (Cab). Under new provisions the bureau will have the power to target assets valued at €5,000 or more.

At present, assets must be valued at at least €13,000 before Cab can target them.

The change is aimed at ensuring those new to drug dealing and other forms or organised crime, or those who never rise about the station of foot soldier, will not escape the clutches of Cab.

Much has been made of such criminals buying new cars, motorbikes and other items associated with a cash-rich lifestyle – from jewellery to jet skis – apparently untroubled by the Garda.

However, under the current provisions a criminal with total wealth of at least €13,000 can be targeted even if they may have no single asset valued at €13,000.

It means the changes to the threshold in the Proceeds of Crime Act will bring very few, if any, criminals into the net who have escaped it so far.

Separately, under the measures unveiled yesterday, the threshold for the seizure of cash under the Criminal Justice Act is to be reduced from €6,500 to €1,000.

Like the mooted changes to the Proceeds of Crime Bill, this is aimed at minimising the comfort zone for small-time criminals; the worker bees of organised crime.

However, the Minister’s statement did not mention that these provisions for the seizing of cash only apply to money being imported into or exported from the State.

And it is perhaps the new Garda taskforce to tackle organised and drug crime that has most potential.

It will be controlled by the Drugs and Organised Crime Bureau and will work with social welfare and Revenue officials to hit more and more criminals, even the minnows, in the pockets early and often.

The description of what the taskforce would do looked like a cut and paste of what Cab and the drugs and organised crime bureau already do. But resourced properly and led from the front, it could become very successful in time.

If Ms Fitzgerald were to send the taskforce to southern Spain on a long-term posting to assist the local police in their investigation of the Kinahan gang, people might be more persuaded that real efforts were being made to take down that criminal entity before it gets any bigger.

The Garda Síochána is sending eight members to soccer’s European Championships in France next month to aid the police there in spotting any Irish hooligans.

That may be a completely different form of policing and for a short, finite period, but it is an indication of the radical steps that could be taken to face down the gangs, just as they were met head on 20 years ago with the creation of Cab when Veronica Guerin was murdered.