Furlong defendant admits using 'both hands' to press on neck 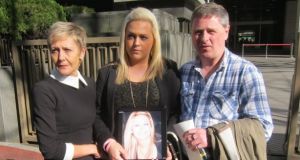 Andrea Furlong holds a photograph of her sister Nicola outside the Tokyo District Court yesterday with her parents Andrew and Angela.

The mother of Nicola Furlong broke down at the trial of her daughter’s alleged killer yesterday as she described the impact of her death on her family.

“I walk around surrounded by a heavy cloak of darkness,” she told a hushed Tokyo District Court, saying the “invasion” endured by Ms Furlong in the last moments of her life had left her feeling “repulsed” by men.

Earlier in the day, Richard Hinds, the American man on trial for murdering Ms Furlong, admitted for the first time he had both hands around the Co Wexford woman’s neck on the night of her death.

Mr Hinds (19) had maintained through his trial that he put only a single hand at any one time on Ms Furlong’s throat and used “light pressure”, after she requested what he called “rough sex”.

When asked about the discrepancy in his account, Mr Hinds blamed a translation error. “I have been saying this since the beginning of my investigation nine months ago.”The defendant also said he felt “very, very sorry”for Ms Furlong’s family despite continuing to deny he was the cause of her death at the Keio Plaza Hotel on May 24th last year.

During more harrowing testimony, Mr Hinds described asking Ms Furlong to continue having sex in his hotel room even after she began coughing up blood, then covering her mouth with his hand to “calm her down.”When asked if he considered calling for help at that point, he replied: “I wasn’t as aware as I should have been.”

“Why do you think Ms. Furlong died?”asked the prosecution lawyer. “I have no explanation for that,”Mr Hinds said. “I feel sorry that I was not more aware,” he told the court, with the Furlongs and his own family looking on. “I feel sorry that I did not know her condition. I feel sorry for her family because they lost their daughter.”

Mr Hinds also continued to deny seeing James Blackston committing an alleged sexual assault against Ms Furlong's Irish friend in the back of a taxi, even after the prosecution again showed surveillance footage apparently showing him turning around from the front seat and exchanging a 'fist-bump' with Mr Blackston during the assault.

When asked why he did not remove his own or the victim's clothes in the hotel despite being engaged in sex, Mr. Hinds said: I'm a gentleman and a gentleman goes along with what she wants to do.'

Prosecution lawyers believe the defendant took an unconscious Ms Furlong back to his room for sex and when she woke up and began to struggle, he strangled her.

Two doctors have testified during the trial that Ms Furlong was strangled for “several minutes.” But Mr. Hinds replied said this morning the testimony didn’t change my opinion that I did not and could not have put enough pressure to kill her.

When asked if he might have made a mistake, he said: “If I misjudged my pressure then I humbly accept it.”

Mr. Hinds has insisted throughout two days of testimony that he was being a good Samaritan when he and Mr Blackston half carried the two Irish women out of a Tokyo bar to the taxi and to the Keio Plaza.

He said he refused her demands to have sex without protection, despite carrying a condom in his jeans pocket. When asked why he took a condom to the rap concert on the night he met Ms Furlong and her Irish friend, he said he “forgot”it was there and probably put it there before he came to Japan.

In her statement after Mr Hinds finished his testimony, Angela Furlong said she was “repulsed” by defence arguments throughout the trial about her daughter.

Nicola’s sister Andrea told the court she felt “so much anger and hatred” toward the defendant and said she wanted “a life for a life.” “Why should he get to go on living when Nicola’s life is over.”

Murder charges in Japan potentially carry the death penalty but because of his age and other factors Mr Hinds is unlikely to be sentenced to death.