Malevolent side of Sonia Blount’s killer revealed during trial 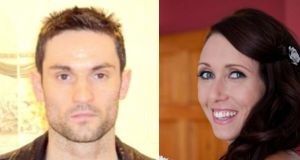 Eric Locke and Sonia Blount: He resorted to the Facebook profile set up in the name of Shane Cully to get back in touch with her. File photographs: RTÉ/Facebook

Sonia Blount was just beginning to enjoy life in October 2013, her abusive partner having left the country.

She was not looking to get into another serious relationship when Eric Locke began working with her, but he was well able to flirt and there was no indication that all was not what it seemed with him.

She couldn’t have known that he maintained a fake Facebook profile, complete with friends and photographs.

They began to go out on dates. They kept things casual and didn’t meet each other’s families, but exchanged Christmas gifts and continued to date in the new year.

Locke let his darker side surface on a night out in mid-January. After attending a comedy gig in Vicar Street, they went to a local pub. Ms Blount attracted the attention of other males and Locke called her a slut.

His berating of her there and all the way home in the taxi was so severe that he found himself begging for forgiveness as soon as he had returned home to his parents’ house.

She asked him to leave it to the morning but he insisted. He could not let it go and, if the direct insults he had thrown at her on the date had not convinced her to end it, his indirect insults veiled in apologies and explanations were enough to mark the end of their romantic relationship.

However, he continued to plague her with text messages, begging for a meeting so he could explain himself further. He eventually resorted to threatening suicide. This got her attention and she seemed to take on the role of a caring friend.

He penned her a long letter of apology, but devoted the latter paragraphs to criticising her for not being there for him or giving him a second chance.

By now, she was stressed and sleepless and seemed to be walking on eggshells in her text messages to him. She seemed aware of his volatile nature, but also seemed to genuinely care.

She confided that she was worried about her former partner returning.

He suggested she get a barring order against such a dangerous individual.

However, she was also considering taking measures to distance herself from Locke. She confided in friends that she was thinking of switching shifts at work because he kept staring over at her. She described him as a “whack job” and “fruit loop”, but didn’t want to get him in trouble.

She eventually cut off contact and concentrated on planning her son’s third birthday party.

That is when the cogs really began to turn in Locke’s head. He tried to have her Facebook profile and email account hacked but could not. He resorted to the Facebook profile he had set up in the name of Shane Cully.

Shane Cully was not awkward or a loner like Eric Locke. He certainly didn’t have the unusual habits that Locke had – habits, such as making detailed lists, that had concerned his family for years.

He began to send Ms Blount messages from Shane Cully. He was at an advantage, having known her likes and dislikes for a couple of months. She eventually accepted him as a Facebook friend and they began exchanging risqué messages.

They arranged to meet in room 346 of the Plaza Hotel in Tallaght. She sent her son for a sleepover with his grandparents following his birthday party.

She prepared an overnight bag and brought a phone charger. Locke made a list of what h e would need: a Stanley knife, pellet gun, masking tape and cable ties.

Only Locke knows if he used the knife and air gun to scare her. He didn’t use the cable ties, strangling her with the cable of her phone charger. When this wasn’t working, he discarded it and used his bare hands.

He also shoved her T-shirt into her throat. Depending on which of his accounts was true, this was either so he wouldn’t have to hear her breathe heavily or see the blood coming from her eyes, nose and mouth.

His victim was naked when he had killed her as he had had sex with her at some stage. He dressed her corpse before tidying up some menus and leaving her lying on the floor.

Locke was due to go on trial in November 2015. He had never been diagnosed with a mental illness but had displayed such strange behaviour throughout his life that his family feared one might have been missed.

They hired a psychiatrist to assess him. He diagnosed their son with pervasive developmental disorder.

His evidence was ridiculed by the prosecution and certainly did not achieve the desired result with the jurors, which was swift in dispensing with his diagnosis.

Ms Blount’s family and friends, who turned out in large numbers on every day of the trial, had their spirits lifted momentarily, when registrar Dr Denise Grogan read out the guilty verdict.

Locke, who had claimed to have an illness incompatible with remorse, turned to them and mouthed the words: “I’m sorry.”