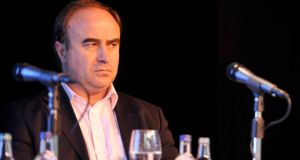 Financial Services Ombudsman Bill Prafiska: the views taken by some of the Irish courts had “absolutely no international backing”. Photograph: Don MacMonagle

The Financial Services Ombudsman has criticised “incoherence” in High Court decisions and called for “consistent” rulings in cases dealing with reviews of decisions made by his office.

In a speech at a law conference in Dublin at the weekend which was highly critical of some High Court decisions, Bill Prasifka said some rulings challenged whether or not his office could exist. He said findings that he should hold an oral hearing if there was a “conflict of material fact” in a case were “not compatible” with the operation of his office. “If we have to hold an oral hearing in every such case, I hope our political establishment has the intellectual honesty to abolish the office because otherwise it is simply a charade,” he said.

The office of the Financial Services Ombudsman was set up in 2004 to resolve complaints made by consumers about financial service providers. It has recently been given the power to name and shame providers who have had findings made against them.

Mr Prasifka said if the logic of one judgment was followed, “potentially every one of the thousands of decisions made since we have set up is constitutionally challengeable”.

‘Intellectual honesty’
“I for one have no principal disagreement with this approach provided we have the intellectual honesty to abolish the financial ombudsman, to say it works in other places in the world but it’s not for us in Ireland, rights are much too important.”

He also said the views taken by some of the Irish courts had “absolutely no international backing”.

The conference on oral hearings and inquiries, was chaired by Mr Justice Michael Moriarty. It examined topics including the need for oral hearings.

Mr Prasifka said he headed up the “most powerful office of the ombudsman in the world” and could award compensation of up to €250,000 and his findings were legally binding.

“The more power you give an office the more it should be accountable to the judiciary; that is not in dispute,” he said. “The only thing that I ask from the courts is that in terms of reviewing our findings and our procedures that they seek to give us directions that are consistent and coherent.”

Mortgage arrears
Mr Prasifka said there were “100,000 complainants potentially who are in mortgage arrears”. He said it was “a human tragedy that five years into the crisis people are only now emerging from the mortgage arrears process, only now making those complaints”.

“If for each of those people seeking advice from us, we have to hold an oral hearing, all I can say is God have mercy on us,” he said.