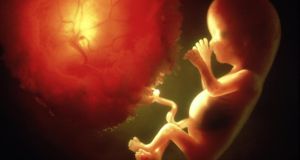 By now it’s a grimly familiar pattern: a family’s private anguish rekindles Ireland’s strained, 30-year debate on the right to life of the unborn.

Once again, politicians find themselves answering questions on the topic they least want to talk about. The loudest voices on either side of the debate rehearse their lines, knowing the radio producers will call. In the Attorney General’s office, lawyers pore over constitutional texts, while in their chambers in the Four Courts, judges nervously wait to learn if they will be called on to decide the case that many of them must dread above all others.

And, in the midst of all the noise a heartbroken family sits at the hospital bedside of a pregnant woman on life support.

The woman suffered a brain trauma a number of weeks ago. But this presented doctors and health officials with a dilemma, as the pregnancy may bring the State’s complex legal regime governing abortion into play.

The political system was convulsed for much of last year with the fraught process that led to the enactment of the Protection of Life During Pregnancy Act, a direct response - albeit a very late one - to the Supreme Court’s call in 1992 for a law to give effect to the Constitution’s provisions on the rights to life of the mother and the unborn.

That new law sets out when and how abortions can be carried out if there is a risk to the life of the mother. As such, based on the information that has come to light about the circumstances confronting medics in the current case that legislation does not apply.

Rather, according to Dr Conor O’Mahony, senior lecturer in constitutional law at UCC, the case could bring two rights into conflict: the right to die a natural death and the right to life of the unborn.

The first of those rights was set out in a 1996 Supreme Court judgment, known as Re a Ward of Court, in a case that centred on a 45-year-old woman left in a near-persistent vegetative state after surgery.

The woman’s family asked that the feeding tube be withdrawn and that she be allowed to die. By a majority, the court decided that withdrawal of the feeding tube was justified in the best interests of the woman and in accordance with her constitutional rights to life, privacy, self-determination and bodily integrity.

The then chief justice, the late Mr Justice Liam Hamilton, stated that the right to life under the Constitution was not absolute and necessarily implied the right to die a natural death. The facts of the case concerned the withdrawal of treatment to allow nature to take its course, and the majority of the judges were of the view that respect for life includes the principle that life need not be preserved at all costs.

In the same case, Mrs Justice Susan Denham - now Chief Justice - described the right to life as the “pre-eminent personal right”. She also wrote that “invasive medical treatment … results in a loss of bodily integrity and dignity”, and that “[A] constituent of the right of privacy is the right to die naturally, with dignity and with minimum suffering”.

To be weighed against that, however, is the right to life of the unborn. Ever since an amendment was approved by the people in a referendum in 1983 - the so-called “pro-life amendment” - the Constitution says that the State acknowledges the right to life of the unborn and “with due regard to the equal life of the mother, guarantees in its laws to respect, and, as far as practicable, by its laws to defend and vindicate that right.”

In the X case in 1992, in which the Attorney General sought to prevent a 14-year-old suicidal rape victim from travelling to the UK for an abortion, the Supreme Court held that the right to life of the unborn would take priority over lesser personal rights of the mother (in that case, the right to travel).

“Of course, the Supreme Court ultimately held that the mother... may have an abortion because her life was in danger,” Dr O’Mahony wrote in a blog post. However, even this conclusion may support the argument for the unborn in the present case. If the unborn may be required to entirely forfeit the “pre-eminent personal right” (the right to life) where necessary to save the right to life of the mother, might the mother be required to merely delay the exercise of a lesser right (the right to die a natural death) to save the life of the unborn?”

Yet he also points out that every word in the 1983 amendment counts, not least the qualification that the State must defend and vindicate unborn life “as far as practicable”. What this means isn’t spelled out, so the courts may end up interpreting it for us.

Until firm, precise information emerges about the case today - not least about the woman’s condition - major caveats apply. But whether it’s in this case or another in the future, the courts may find themselves being asked whether, and for how long, it’s practicable to keep a pregnant woman alive.