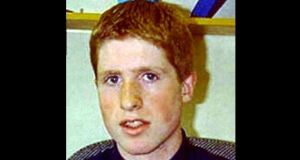 The last trace of Trevor Deely, who was aged 22 when he vanished, was a phone call from Dublin city centre to a friend after 4am on December 8th, 2000

The family of Trevor Deely, the man who vanished without trace 15 years ago, has said it will never give up hope of a breakthrough in the case.

The last trace of Mr Deely, who was aged 22 when he disappeared, was a phone call from Dublin city centre to a lifelong friend just after 4am on Saturday, December 8th, 2000.

“You have to keep some positivity. That’s our biggest problem: to remain focused and positive and not give up hope,” said Michael Deely, the missing man’s father, on the eve of an annual prayer service on Friday night at Ballycane church in Naas, Co Kildare.

Originally from Naas, Trevor Deely was making his way home to his apartment on Serpentine Avenue in Ballsbridge, Dublin 4, when he vanished.

The Deely family very quickly organised a high-profile poster campaign in Dublin city centre and the case has remained in the media for the last decade and a half.

No evidence or information of any significance has emerged that might solve the mystery, however.

Michael Deely said the family would never give up. It had been tested with the passage of time since his son’s disappearance, and the annual prayer service offered some brief respite, he said.

“It’s something we do every year; it’s a time when we get a bit of peace. For us it’s a time to reflect.”

Mr Deely said the family was still hopeful information would emerge about his son. The more public awareness about the case, the greater the likelihood it may be solved one day.

“We don’t want people to forget about him,” he said. “It’s terrible, absolutely terrible. And you can see the effect on all the family at this time of year.

“Everybody is feeling worn out by it after 15 years. We say to people to keep watching and keep listening; keep an eye out for Trevor and keep his name out there. We won’t let him be forgotten about: that’s the main thing.”

Trevor Deely would now be aged 37 and an uncle to the nine children of his brother and two sisters.

He attended his office Christmas party on the night of Friday, December 7th, 2000, at the Hilton Hotel at Charlemont Place in Dublin 2.

He went on to Buck Whaleys nightclub on Lower Leeson Street, leaving the venue at 3.25am on December 8th.

He went to his office at Bank of Ireland Asset Management at Leeson Street Bridge and logged on to his computer while having a coffee with a friend working the night shift.

He left just after 4am and phoned a lifelong friend fromNaas, leaving a message about how much he had enjoyed the night out with colleagues.

At 4.14am he was recorded on CCTV outside the Bank of Ireland at Haddington Road and Baggot Street Bridge. He was carrying a blue ACC golf umbrella as it was a stormy night. There were never any further confirmed sightings and his disappearance remains a mystery.