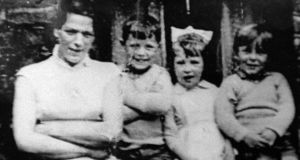 Jean McConville with three of her children shortly before she disappeared in 1972. Photograph: Pacemaker Belfast

The family of Jean McConville, who was abducted and murdered by the IRA more than 40 years ago, is suing the Police Service of Northern Ireland (PSNI) and the British Ministry of Defence.

On the 10th anniversary of the finding of her remains, members of the McConville family said yesterday they were pursuing the case against the police, the PSNI chief constable Matt Baggott and the defence ministry because of alleged failings in the police inquiry into her abduction and murder.

The body of Mrs McConville, a mother of 10 and one of the Disappeared, people abducted and murdered by republican paramilitaries during the Troubles, was found at Shillinghill beach in Co Louth on August 27th, 2003.

“The McConville family firmly believes that the RUC and subsequently the PSNI have utterly failed to assist the family’s quest for the truth. It is abundantly clear that police negligently failed to hold a prompt and efficient investigation into this matter,” the McConvilles’ solicitors J Mulholland and Company said in a statement yesterday.

The McConvilles are claiming the police failed to act promptly and properly to try to safeguard Mrs McConville after she was abducted from a bingo hall by the Provisional IRA on November 30th, 1972, and questioned on suspicion of being an informant.

The family said Mrs McConville was found by a British army patrol in the early hours of December 1st, 1972, “roaming the streets in a state” and conveyed to Queen Street RUC Barracks. At about 6pm on that date Mrs McConville was abducted from her home by individuals claiming to be from the Provisional IRA.

“This was reported to the RUC at Queen Street within hours. However police refused to assist,” the solicitors said.

“This was again reported to police daily throughout the months of December and January, however, police still failed to act. It is believed that the deceased was tortured and murdered by the PIRA on or around December 1972.”

The statement added: “Unfortunately, the McConville family continue to mourn and grieve at the loss of their mother because they remain in the dark, their questions remain unanswered.

“The family still does not know the circumstances of this horrendous event – why was their mother taken? Why would the RUC not intervene or investigate the matter?

“The family now feels that given the lengthy passage of time and the obstruction they continue to meet seeking the truth into the disappearance and murder of their mother that they have no alternative other than to hold the police and Ministry of Defence to account,” the statement continued.

“Our clients feel that legal action is now essential in their journey for truth, and accordingly representations have been sent to both the chief constable and the Ministry of Defence.”