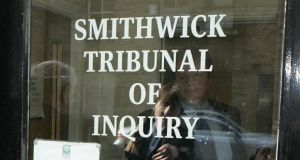 A detective has said information given by the PSNI to the tribunal about possible collusion between gardaí and the IRA was so brief it could not be tested.

A senior Garda officer responsible for gathering intelligence and combating terrorist activities has said the PSNI has only shared information about alleged Garda collusion with the IRA in very brief format.

Det Chief Supt Pat Kirwan, the head of Security and Intelligence within the Garda, told the Smithwick tribunal that information given by the PSNI to the tribunal about possible collusion between gardai and the IRA was so brief it could not even be tested.

“We have no issue with the sharing of information on the workings of the relationship between PSNI and the British security services with the tribunal. The issue arises when sharing with others directly impacts on the Garda and we are not given an even a half chance of interpreting what it means.”

His comments at the tribunal today followed evidence given by a senior PSNI officer last October in which it was suggested Dundalk Garda station had always been a good source of intelligence for the IRA.

Det Chief Supt Kirwan said such statements, often shared by the PSNI with the tribunal, were so short they were often just one line. There was not “half a chance” to investigate and at times the information and intelligence shared by the PSNI was so brief it was no clear what was meant by it.

The Smithwick tribunal is investigating allegations that the killings of RUC officers Chief Supt Harry Breen and Supt Bob Buchanan in March 1989 followed the supply of information by some gardai in Dundalk to the IRA about the movements of both officers that day.

The officers were killed in an IRA ambush minutes after leaving a meeting in Dundalk Garda station.

After this morning’s evidence by Det Chief Supt Kirwan, the families of the murdered officers issued a statement through their solicitors calling for an inquiry by the Garda.

“It is very regrettable indeed to hear such a senior Garda officer complain that the wide-ranging and significant recent intelligence has not been properly shared by the PSNI and British security services and cannot be meaningfully investigated without normal sharing arrangements being followed,” John McBurney and Ernie Waterworth said.

“Clearly this needs very urgent attention with a view to seeing all aspects fully and thoroughly investigated by the Commissioner.”

Last October PSNI asst chief constable Drew Harris told the tribunal that the force had current intelligence that several Dundalk gardai, including one senior member, had passed information to the IRA during The Troubles.

He also alleged that leaked information had enabled the IRA to plan the killing in a car bomb of Lord and Lady Gibson two years before the two PSNI officers were killed in an ambush after leaving Dundalk station.

Det Chief Supt Kirwan told the tribunal this morning that the Garda had been supplied by the PSNI with information relating to the matters being investigated by the tribunal.

However, he said the Garda had received the information in the same form as the tribunal had; in a brief format intended for publication.

He pointed out while asst chief constable Harris had made claims of Garda collusion, no evidence had been supplied to the Garda that might allow that claim be fully explored. He had written to senior officers on the PSNI about the matter but was awaiting a reply.

However, he said the level of co-operation between the Garda and PSNI generally was very good and that asst chief constable Harris was professional in his approach.

Counsel for the tribunal Mary Laverty SC said the tribunal had already been told by the PSNI that because the intelligence it had was so sensitive it could not be shared.