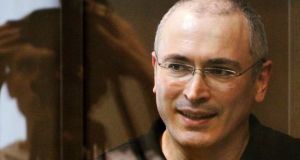 The former Russian oligarch Mikhail Khodorkovsky is a potential suspect in a money-laundering investigation being conducted by the Garda Bureau of Fraud Investigation (GBFI), Dublin District Court has been told.

Asked by Judge Timothy Lucey if it was intended to charge Mr Khodorkovsky, Michael McDowell SC, for An Garda Síochána, said that was a matter for the Director of Public Prosecutions (DPP).

Mr Khodorkovsky, a former Amnesty Prisoner of Conscience who spent 10 years in a Russian prison colony, is considered one of the world’s foremost critics of President Vladimir Putin.

The High Court heard that, as part of his successful application for asylum in the UK last year, he said that were he to return to Russia, he would “most likely spend the rest of my life in prison or indeed face the very real risk that I may be killed”.

Mr Khodorkovsky, once one of Russia’s richest men, was jailed in 2003 in Russia on foot of charges and prosecutions that have been widely condemned as politically-motivated and designed to destroy a political rival of President Putin.

The multi-billion dollar assets of the Yukos Oil Company – of which he was the main shareholder – were seized as part of a scheme designed to keep its oil under Russian control, the court in Dublin has been told.

Mr Khodorkovsky was pardoned in 2013 by Mr Putin, following negotiations conducted by the German government, acting on behalf of the EU.

The district court is being asked to unfreeze more than €100 million frozen since March 2011, under repeated applications from the GBFI under the Criminal Justice (Money Laundering and Terrorist Financing) Act 2010.

Repeated, renewable 28-day orders have meant the Irish-domiciled funds, which are in trusts, have been frozen for five and a half years. The bureau says the funds are the subject of an ongoing money-laundering investigation.

Remy Farrell SC, for Mr Khodorkovsky, said the funds come from Yukos dividends and share buy-back schemes in 2002 and 2003, and that the Garda’s position appeared to be that the funds might be associated with crime because of the Russian convictions.

These convictions have been criticised in numerous jurisdictions and by the European Court of Human Rights (ECHR).

Mr McDowell said the onus was on Mr Khodorkovsky to show there were not reasonable grounds for the Garda investigation.

He said Mr Khodorkovsky was the owner of the funds, and that the courts “in a country with which Ireland does business” had found him guilty of fraud and the embezzlement of funds and of stealing property from Yukos.

Judge Lucey pointed out that the replying affidavit from the Garda to Mr Khodorkovsky had been a “one pager”. It was “terse,” Mr McDowell agreed.

He said it was not the practice to give information to people who were under investigation.

Asked by Judge Lucey for the Garda’s view of the criticisms of Mr Khodorkovsky’s conviction by the ECHR, Mr McDowell said the judgment concerned “peripheral” matters and not the decision of the Russian court.

Mr Farrell said this was a surprising submission.

The ECHR criticised the Russian authorities for multiple breaches of Mr Khodorkovsky’s human rights, including his article 3 right not to be subjected to inhuman or degrading punishment, and his article 6 right to fair procedure.

The money could have gone from Yukos into a “labyrinthine series”of trusts linked to particular individuals other than by way of the paying of dividends.