Evidence from US witness sought in Jean McConville case 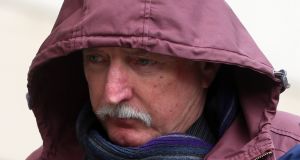 Efforts are being made to obtain evidence from an American witness in the case against a veteran republican charged over the killing of Jean McConville, a court heard today.

A prosecution lawyer disclosed attempts to have them compelled to testify about alleged offences linked to Ivor Bell.

The 79-year-old faces charges of soliciting to murder connected to an allegation that he encouraged or persuaded others to kill Mrs McConville. The victim, a mother of 10, was seized by the IRA from her Divis Flats home in west Belfast in 1972 after being wrongly accused of being an informer.

Following her abduction she was shot dead and then secretly buried. Her body was discovered on a Co Louth beach in 2003.

Mr Bell, from Ramoan Gardens in the Andersonstown district of the city, was arrested and charged in March 2014. The case against him centres on an interview he allegedly gave to US researchers from Boston College as part of a project with former paramilitaries about their roles in the Northern Ireland conflict.

Although transcripts were not to be published until after the deaths of those who took part, a US court ordered the tapes should be handed over to PSNI detectives investigating Mrs McConville’s killing.

It is alleged Mr Bell is one of the Boston interviewees, given the title Z, who spoke about the circumstances surrounding the decision to abduct her. A voice analyst has been enlisted as part of the case.

The accused - who is currently on bail - denies any role in events surrounding the murder, claiming he was not even in the city at the time. His lawyers contend that he does not have a case to answer.

They are expected to mount an attempt to have the charges thrown out at a preliminary inquiry hearing where witnesses can be cross-examined in a bid to test the strength of the evidence.

At Belfast Magistrates’ Court on Monday, prosecution lawyer John O’Neill provided an update on proceedings. He indicated that efforts have been made to compel an unnamed witness from America to give evidence. However, that person remains unwilling to comply with requests.

An application may now be made to have this evidence admitted on a hearsay basis.

The case was then adjourned until next month when the prosecution is expected to finalise its position.