EU summit: ‘Electing a pope is easier,’ says Varadkar as no decision on top jobs

Speaking in Brussels, the Taoiseach has called for an understanding of Irish issues, both with regard to Brexit and generally, from candidates running for election to the top roles within the European Union. Video: EU Council 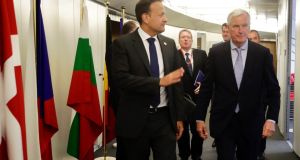 A weary Donald Tusk told journalists in Brussels early this morning that EU leaders had failed to agree on a new president for the European Commission after four hours of sometimes fractious discussions.

“There was no majority on any candidate,” the president of the European Council said, announcing a further summit to deal with the top jobs issue on June 30th.

European Union leaders will now meet again on June 30th to seek agreement on who should inherit the bloc’s top jobs – including the head of its central bank.

The 27 national leaders meeting in Brussels for secret deliberations – no aides or phones allowed – remained at odds over who should next steer the EU, with French president Emmanuel Macron blocking German chancellor Angela Merkel’s pick. “There was no majority for any candidate,” Mr Tusk told a news conference. “We will meet again on June 30th.”

The prominent positions, including the head of the European Central Bank (ECB) and the EU’s executive European Commission, lead the bloc’s policies on issues ranging from monetary policy to migration and Brexit to trade.

German, French, Spanish, Italian and Dutch leaders are aiming to prepare a deal on the package of the five senior EU jobs when they travel to Japan on June 28-29th for a G20 summit of major global economies. For the European Union, the Commission presidency is a pivotal role.

The body acts as the bloc’s competition watchdog, oversees national budgets and proposes policies from climate change to tech regulation – big areas as member states struggle with a range of challenges at home and abroad.

The bloc’s top jobs – including the head of the European Council tasked with crafting compromises between member states, whose particular interests often vary – are all changing hands later this year after an EU-wide election.

Power centres Berlin and Paris clashed over who should take over at the helm of the Commission, with Ms Merkel backing compatriot Manfred Weber, a deputy head of her centre-right sister party CSU.

Last round of consultations on appointments before the start of #EUCO. Yesterday I was cautiously optimistic. Today I’m more cautious than optimistic. pic.twitter.com/AbRqfpPaYT

This system, proposed by MEPs but never fully endorsed by leaders, would allow the parliament exercise its right to vet the leaders’ Commission decision by restricting the field to candidates nominated by the parliamentary groups and then implicitly endorsed by voters in the parliament elections. The EPP, the largest of the groups, came out on top.

EPP leaders were making clear that if Mr Weber was now out of the running, so too were the spitzenkandidats of the second and third parliamentary groups, the Socilaists’ Frans Timmermans, and the liberal Renew Europe group’ Margrethe Vestager.

Asked whether the political deadlock had destroyed the Spitzenkandidat process, Ms Merkel said: “I cannot give you a definitive answer until the end of the process. However it is naturally a challenge. That is completely clear.”

The net will have to be cast wider, although it is not clear how MEPs will accept the rebuff. The challenge remains an almost impossible reconciling of representation of party, regional, and gender quotas for the jobs of presidencies of the Commission, Council, European Central Bank, and of High Representative for Foreign Affairs.

The parliament’s own presidency, in the gift of MEPs, is also regarded as part of the mix that needs to be balanced.

The EPP is reported to be determined to maintain its grip on the commission – Mr Weber’s eclipse may provide an opportunity for French Brexit negotiator, Michel Barnier.

Among other names being mentioned were Belgian caretaker prime minister Charles Michel for the European Council and the EPP’s Croatian prime minister Andrej Plenkovic for the Commission.

Negotiations are expected to resume next week in Osaka, Japan, when France, Germany, Italy, Spain, the UK and the Netherlands will attend the summit of G20 leaders.

Any new Commission chief must not only get the backing of a clear majority of – or, preferably, all – national leaders but also be accepted by the new European Parliament, which will sit for the first time on July 2nd.

National leaders want to have their proposal on the jobs puzzle ready before that and put it to the chamber, which votes on laws proposed by the European Commission.

“We suggest the person, but we definitely don’t want to see a crisis with parliament, to realise that what we suggest is not being accepted,” Ms Merkel said.

“This wouldn’t be good for the work of the Commission in the next five years.”

The fifth prominent posting up for grabs is the EU’s chief diplomat. Other names in the frame include Mr Barnier, currently the EU’s Brexit negotiator, Denmark’s Margrethe Vestager, currently the bloc’s top competition official, and Belgium’s caretaker prime minister Charles Michel. Ms Vestager – previously publicly praised by both Ms Merkel and Mr Macron – could help avoid a tug-of-war between the national leaders and the European Parliament as the liberal faction there has proposed her for the Commission chief.

Mr Macron, however, suggested after the summit that no more parliament candidates would be considered.

“It’s quicker to elect the pope very often than it is to fill these particular positions,” Taoiseach Leo Varadkar quipped. – Additional reporting Reuters