DUP: ‘rioters are wrong but so is the Parades Commission’ 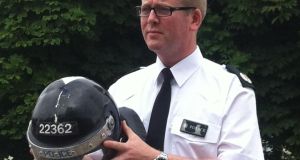 PSNI Chief Constable Will Kerr displays a police officer’s helmet which was struck by a ceremonial sword during rioting in north Belfast on Friday night. Photograph: Lesley-Anne McKeown/PA 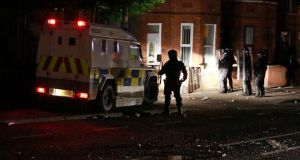 Policemen hold shields against attacks by loyalists. Hundreds of loyalists were involved in a tense stand off with riot police throughout the evening, with disorder finally breaking out around 10.30pm. Photograph: Cathal McNaughton/Reuters 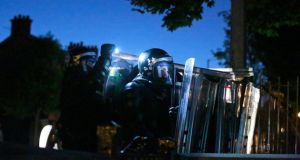 Police prepare to charge loyalists throwing petrol bombs in the Woodvale Road area of North Belfast last night. It was the third night of unrest after an Orange Parade was blocked from marching through the mainly Catholic Ardoyne area in Belfast on Friday. Photograph: Cathal McNaughton/Reuters 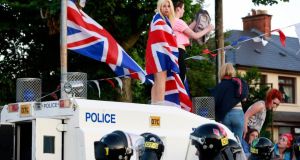 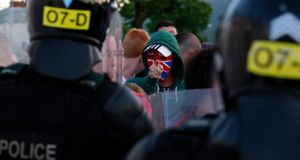 A Loyalist protester gestures to the police in the Woodvale Road area of North Belfast last night. Photograph: Cathal McNaughton/Reuters 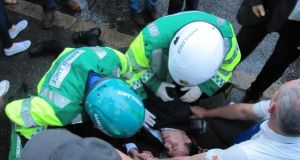 North Belfast MP Nigel Dodds as he was knocked out during the loyalist riots that have hit his constituency in recent days. DUP handout/PA Wire

The Democratic Unionist Party has defended the right to protest peacefully while condemning loyalist rioters and the Parades Commission for banning an Orange march on Friday.

The meeting follows a third night of loyalist violence follwing a decision by the Parades Commission to ban the parade passing the flashpoint mainly Catholic Ardoyne area.

After the 90-minute meeting Mr McCausland condemned the street violence but declined to call for the protests to end. He said: “The right of peaceful protest, the sort of protest the Orange Order has advocated and called for, is fundamental in any democratic society. Yes, the people who throw bricks or missiles are wrong but so are the Parades Commission.”

The Orange Order, which has been widely criticised for calling people on to the streets without a plan, said the PSNI had questions to answer about how officers handled the situation.

Mr McCausland also questioned the rationale behind bringing in more police officers from other UK forces. He added: “It is clear over the last few nights there has been some gradual diminution in the level of violence. If that is gradually reducing, is it necessary or wise to bring in additional policing resources, particularly when we feel it is probably more sensible to use local police officers who know the local situation and understand the geography of the areas they are working in?”

Meanwhile, Independent peer Lord Ken Maginnis criticised Northern Secretary Theresa Villiers for speaking out against the Orange Order. He said: “The Secretary of State’s glib and superficial weekend criticism of the Orange Order leadership was singularly offensive and was doubtless at the instigation of some of her lackeys who seek to play both ends against the middle.

“What has been happening has been quite disgraceful and it is very much to the credit of the Orange Order’s leadership that the backlash has been kept to a minimum. But they cannot hope to maintain their influence unless greater honesty and realism is shown by their critics.”

Northern Secretary Theresa Villiers said this morning there would be “very serious consequences” for those found to have engaged in violent activity in Northern Ireland over the last few days.

Ms Villiers called for calm and condemned continuing violence which has seen police deployed in North Belfast for the third night.

“It’s a real shame that this is occuring just a few short weeks after such an incredibly succesful G8 for Northern Ireland,” Ms Villiers told RTÉ.

“It’s vital that everyone appeals for calm and that those engaging in this violence know that they can expect to face the courts and potentially prison sentences and a life-long criminal record,” she added.

Trouble again flared in the Woodvale Road area in the north of the city last night. Hundreds of loyalists were involved in a tense stand off with riot police throughout the evening, with disorder finally breaking out about 10.30pm.

A number of petrol bombs and other missiles were thrown at police, who responded by firing baton rounds.

The Police Service of Northern Ireland (PSNI) said one officer was injured in the initial clashes. Seven police officers were injured at Woodvale.

Police said the Shore Road in the north of the city was closed at its junction with Mount Vernon due to a barricade in the road.

A special sitting of Belfast Magistrates’ Court was held yesterday and to-date 22 people have appeared before judges charged with public order offences.

Mr Kerr warned that the courts would be open “every day if necessary” to deal with the troublemakers.

The Stormont Assembly has been re-called tomorrow to debate the fall-out from the determination by the Parades Commission banning the contentious march.

In a statement, the Orange Order said: “The PSNI have serious questions to answer, not least, with so many police officers available, why were they unable to stop clearly orchestrated attacks, and, in the case of the Short Strand, a prolonged attack lasting over 30 minutes along the length of the peace wall?

“The violence, which we condemn, cannot be used as an excuse for not addressing the issues that have been raised by this ludicrous determination.

“There will be the blame game and point-scoring by all for the events that unfolded; however, the Orange institution will be scapegoated for where the responsibility for this crisis truly lies — at the door of the Parades Commission.”

Trouble first broke out on Friday as police attempted to enforce a decision banning Orangemen from passing the Ardoyne on the Crumlin Road on their way back from traditional Twelfth of July commemorations. The Orange Order had originally called for protests against the Ardoyne determination of the Parades Commission adjudication body but, in the wake of Friday’s violence, senior Orangemen called for protest action to be suspended. PSNI Chief Constable Matt Baggott has condemned those responsible for the trouble and also criticised those within the Orange Order leadership who called for protests.

Coronavirus: 394 new cases and no further deaths reported in the State 17:52
Philomena Lee among five given leave to challenge mother and baby homes report 18:18
Louth man’s conviction for IRA membership ‘a miscarriage of justice’ 17:39
Bicycle-drawn hearse brings cycling advocate on his last journey 17:31
Covid-19 Vaccine Tracker: What's available in the Republic of Ireland and what else is coming? 16:53