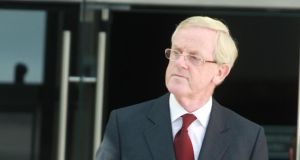 Frank Dunlop (65) agreed with Michael O’Higgins, SC, defending James Kennedy, that he had told “big lies about important matters” at the Flood tribunal in April 2000 but insisted he was now telling the truth to the jury. Photograph: Collins Courts

Former political lobbyist Frank Dunlop agreed he told “big lies about important matters” when he gave evidence to a tribunal 13 years ago - but told the Dublin Circuit Criminal Court he was telling the truth now.

Mr Dunlop was giving evidence at the trial of three former councillors and a sitting councillor, all accused of receiving corrupt payments for council votes that took place in the 1990s.

Businessman James Kennedy (66) is charged with making the payments. Mr Kennedy of Cormorant Way, Queens Quay, Gibraltar, pleaded not guilty to 16 counts of making corrupt payments between June 1992 and October 1997 to members of Dublin County Council to rezone land at Carrickmines as industrial.

Sean Gillane SC, prosecuting, has already told the jury that evidence will be heard that Mr Kennedy corruptly gave money to named councillors through Mr Dunlop so votes could be secured in relation to the rezoning of lands owned by Mr Kennedy.

Mr Dunlop (65) agreed with Michael O’Higgins, SC, defending Mr Kennedy, that he had told “big lies about important matters” at the Flood tribunal in April 2000 but insisted he was now telling the truth to the jury.

When Mr O’Higgins suggested that Mr Dunlop was continuing to lie to the jury and tell “a version of the truth” in order to protect the interest of developers who had made him a multimillionaire, Mr Dunlop replied: “Absolute rubbish”.

When asked how many clients had paid him over £1 million in cheque or equity for lobbying work during the early or late 1990s, Mr Dunlop replied, “One. Owen O’Callaghan,” in reference to £1.8 million he had received from the developer.

However, Mr Dunlop then agreed he had been given a 5 per cent equity stake in the Citywest development, worth between £2.5 million and £3 million, although he said this had been “substantially diluted” several times. “The agreed fee was £75,000 when the project was completed. The client said he couldn’t afford to pay, but they agreed to give me an equity stake,” he said.

Mr O’Higgins also suggested Mr Dunlop had been paid £1.25 million from developer Sean Mulryan for his part in the rezoning of lands at Baldoyle Racecourse, but Mr Dunlop said he could not recollect that.

Mr Dunlop said the rezoning of lands at Citywest and Baldoyle Racecourse for industrial purposes had been “clean” projects in that he had not bribed anyone to bring them about. He agreed the process of lobbying was not “rocket science” and that it involved identifying local councillors and explaining to them the benefits of a particular commercial or residential development project, in terms of bringing jobs and amenities to the area.

“Aren’t you incredibly lucky, earning all those millions from developers for telling councillors this would bring jobs? Why would they come over all Santa Claus to you?” asked Mr O’Higgins.

“You’d have to ask them. To put it crudely, that’s how it works,” said Mr Dunlop.

Mr Dunlop said he was introduced by the late Liam Lawlor to David Shubotham, one of the partners in Davy Hickey Properties, who wanted to develop land at Newlands in Saggart, which became known as Citywest. He said the vote to rezone lands at Citywest took place on March 11th, 1991 and was the first time he had been involved in lobbying councillors.

He agreed they had managed to get all of the councillors bar one to vote in favour of the rezoning, and that the process involved meeting the councillors and flying 20 of them to Bristol to visit a business park there, as none existed in Ireland at the time. Mr Dunlop agreed Citywest gave him £20,000 in June 1991 for councillors who might have requested it, but denied that it was “dirty money”.

“People were entitled to legitimate donations,” he said. “You can’t point to any reason why these hard-nosed developers who had cash flow problems and couldn’t pay your fee, why would they give £20,000 to you on the understanding that you would have it available for councillors?” asked Mr O’Higgins SC.

“It was the culture of the time and place,” replied Mr Dunlop.

“Sorry, the culture of the time was that the country was on its knees. Could it be a sort of ‘Thanks lads, you looked after us, you did the right thing?’,” asksed Mr O’Higgins.

Mr Dunlop agreed his career prior to becoming a political lobbyist, including his time spent in a seminary, his work as a RTÉ journalist and as a Fianna Fáil press secretary, showed that he had “a streak of idealism”. However he denied that “it all went wrong” and he later became “an out-and-out cynic”.

The corruption trial resumes tomorrow before Judge Mary Ellen Ring and a jury of seven women and four men.

One juror was discharged this morning because of a bereavement. The trial is expected to last until the end of this month.