Irish courts have, to date, tiptoed around piercing the corporate veil in separation and divorce cases 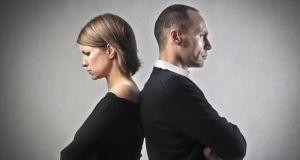 Two recent family law cases have highlighted the issue of whether a company will be able to maintain its separate legal identity when its major shareholder is involved in divorce litigation.

It is a long established core principle of company law that a company is a distinct legal entity from its shareholders, even a majority shareholder who has total control over the company.

Notwithstanding this, the family courts in England have until recently routinely made orders directing a company to transfer its assets to the spouse of a shareholder.

The Irish courts have, to date, stopped short of going as far as this.

However, Irish courts do regularly make orders directing a company shareholder to give company data and documents, information that is confidential to the company, to their spouse.

A recent English case has made clear when a company might have its assets transferred to the spouse of a shareholder.

The case in question is the case of Prest versus Petrodel. The husband, Michael Prest, was the founder and sole shareholder in Petrodel Resources. In his divorce case, he claimed that Petrodel’s assets did not belong to him and that he was £48 million in debt. Initially the court ordered the company to transfer properties worth £17.5 million to the wife. The company appealed this decision and the UK’s Supreme Court.

The court decided that, in general, orders could not be made awarding company assets to a shareholder’s spouse.

However, the court then went on to make just such an award of company assets to the wife in this case because it found that the husband was the beneficial owner of the assets.

He had, for example, provided the funds to buy them. He also took funds from the company whenever he wished without company authority.

The court therefore rubber-stamped the transfer of assets from a company to a spouse, albeit with limitations.

Whichever of these methods of transferring assets to a spouse is used the results are often unsatisfactory and crude.

The former may leave the dependent spouse with an illiquid minority shareholding and the latter is very tax inefficient.

A case in Ireland in June of this year also highlighted the issue of the separate legal status of a company, albeit on a narrower issue.

The case of Q versus Q involved an application by a wife to compel a husband to give certain company information to her. The husband argued that he was not in a position to provide the information pertaining as the company was a separate legal entity.

He also argued that the information being sought was not within his possession or power to give.

He found that the husband had been able to receive all and any information he needed and he could not therefore argue that the documents his wife was seeking were beyond his possession or power to give.

The case demonstrates that a company is not immune from involvement in family law cases in this country just because it is a separate legal entity.

One feels it is only a matter of time before the issues that arose in Prest versus Petrodel are before the Irish courts.

If the Irish courts do follow Prest, the impact on company law here would be dramatic in that company assets might become fair game for the spouses of divorcing shareholders.

One option would be to introduce legislation along the lines of the Australian model which enables a court to make a whole range of orders concerning a third party, including orders against a company to transfer assets from the company to a spouse of a shareholder.

Indeed, perhaps such legislation should be introduced here sooner rather than later so as to provide certainty for couples and companies alike and to make it easier for the courts to make proper provision for spouses on divorce.