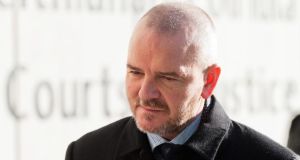 The then minister for justice Michael McDowell was a guest speaker at Thomas Byrne’s Christmas Party in the Four Seasons, the trial of the former solicitor has heard.

The trial also heard how Mr Byrne was introduced to former Irish Nationwide Building Society chief executive Michael Fingleton in a private box in Croke Park before the finalisation of a €4.5 million loan.

Mr Byrne (47) of Walkinstown Road, Crumlin is accused of theft and fraud offences totalling €51.8 million. The charges allege he transferred clients’ homes into his name and then used them as collateral for property loans.

He has pleaded not guilty at Dublin Circuit Criminal Court to 51 counts of theft, forgery, using forged documents and deception between 2004 and 2007.

A former manager of the Dundrum branch of Irish Nationwide Building Society detailed how Mr Byrne borrowed a total of €11.4 million from the society over a 15 month period in 2006 and 2007.

Branch manager Colin Walsh said he met Mr Byrne through another solicitor in 2005 and that he attended a Christmas Party in the Four Seasons being hosted jointly by Mr Byrne and property developer John Kelly.

He said Mr McDowell was a speaker at the event along with comedian Ardal O’Hanlon.

Mr Walsh told defence counsel Damien Colgan SC that he socialised with Mr Byrne and would have been in his Lad Lane apartment on social occasions. He agreed that he may have been at the apartment late into the night but said he couldn’t remember if he ever stayed over.

He said Mr Byrne also brought him and several other business associates to the Ryder Cup.

Mr Walsh said Mr Byrne’s third loan application for €4.5 million required the approval of Mr Fingleton because of its size. The witness said he introduced Mr Byrne to Mr Fingleton in a box in Croke Park and that the loan was later granted. However, he said the meeting and the loan approval were not linked.

The former internal auditor with Irish Nationwide, Killian McMahon, told the court via video link from Los Angeles that many of the properties used as security by Mr Byrne were worthless to the society as it emerged it did not have “first legal charge” over them.

The society granted a €4.8 million loan to Mr Byrne in 2006 based on nine properties being offered as security. Mr McMahon said it later transpired that none of these properties were valid collateral.

The court heard that on October 15th, 2007 Irish Nationwide sent out a large number of letters to client’s solicitors asking them to provide proof of ownership of their homes.

Mr Walsh told prosecuting counsel Remy Farrell SC that this was prompted by the breaking of the “Michael Lynn story”.

The court was told the Lynn was a solicitor who borrowed money using bogus security in similar alleged circumstances.

He said that Mr Byrne got one of these letters and responded to Mr Walsh by asking if there was a “witch-hunt” in progress.

Mr Walsh said he responded that if the accused turned in the title deeds “all would be solved.”

He said when Mr Byrne failed to provide proof of ownership he called to the solicitor’s office but no one was there. He then called to his home on Lad Lane and “saw that the whole apartment was emptied out”.

The next day he went back to the solicitor’s office and was told by someone to refer matters to the Law Society.

The trial continues before Judge Patrick McCartan and a jury of seven men and five women.