Tourists describe man’s fist like ‘a hammer’ going into Monet 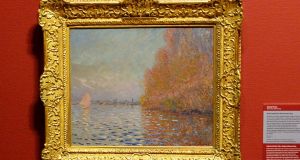 Two New Zealand tourists have described how they saw a man’s fist go through a Monet painting estimated to be worth €10 million in the National Gallery of Ireland two years ago.

The jury has also heard from security staff and a paramedic who attended at the scene after the incident.

The court heard the accused man told witnesses he was faint after the incident, complained of chest pain and said he had fallen against the painting.

Andrew Shannon (50) of Willans Way, Ongar, Dublin 15, has pleaded not guilty at Dublin Circuit Criminal Court to damaging one Claude Monet painting entitled Argenteuil Basin with a Single Sail Boat (1874) at the National Gallery of Ireland on Clare Street on June 29th, 2012.

He further pleaded not guilty to damaging two Felim Egan paintings at the Shelbourne Hotel on January 8th, 2014.

Michael Kelly Williams told Kerida Naidoo, prosecuting, that he and his wife, Toni Ashton, visited the gallery on June 29th, 2012.

Mr Kelly Williams said he saw the man put his fist straight into the painting.

He said that in his work as a flight attendant he had treated people feeling faint before and, on the basis of his experience, he formed the view that the man was in no way suffering from feeling faint.

Ms Ashton told Mr Naidoo that she was standing beside her husband when she saw an arm appear and a fist go through the Monet. She said it was like a “hammer” and described the movement as a lunge.

Michael Bowman, defending, said that within 12 months of the incident Mr Shannon had undergone open heart surgery and a quadruple bypass. He said it was found that 90 per cent of his arteries were blocked.