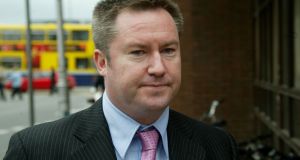 The Supreme Court has refused to hear a further appeal by struck-off solicitor Michael Lynn ahead of his trial for alleged theft of almost €30 million.

Mr Lynn (50), Carlton Square, Maynooth, Co Kildare, is due to stand trial at Dublin Circuit Criminal Court next year on 21 counts of stealing the money from seven financial institutions.

He left Ireland in 2007 but was extradited from Brazil last year, after spending four and a half years on remand at the Cotel prison, in north western Brazil, as he fought his extradition back to Ireland.

Ahead of his extradition, Brazilian authorities sought assurances from Ireland that any time Mr Lynn spent in prison awaiting extradition would be deducted from any potential prison sentence here, and that he would not serve more than 30 years in prison here, if found guilty. The assurances were required as part of the Brazilian extradition process.

He challenged the Irish assurances in High Court proceedings, arguing, due to the constitutional separation of powers, they could not be given. He lost and the Court of Appeal later dismissed his appeal over the High Court decision.

The Court of Appeal said there was “no possibility whatsoever” of Mr Lynn, if convicted, being required to spend more than 30 years in prison. It noted he would also have rights of appeal, remission entitlements and that the executive may release a prisoner at any stage.

Lawyers for Mr Lynn then sought a further appeal to the Supreme Court.

In a recent published determination, three Supreme Court judges said the issues had been adequately addressed in both the High Court and Court of Appeal .

Mr Justice Donal O’Donnell, Mr Justice John MacMenamin and Mr Justice Peter Charleton said it was logical to infer the reliefs sought in these proceedings were designed to gain some advantage for Mr Lynn in the forthcoming criminal trial.

They said it was not any error of law for the Irish authorities to say to the Brazilian authorities that Mr Lynn, if convicted, would not be punished beyond what was necessary for the proper sentence related to any offence/offences he might be found guilty of. He is presumed to be innocent, they added.

This “diplomatic note” from the Irish authorities stated an obvious and universally applied sentencing principle.

Both sides have a right of appeal and there is also power, vested in the President, to pardon or commute any sentence, they said. This meant, even if a trial court sentenced Mr Lynn without taking into account the time in custody, and such sentence was upheld on appeal, the Minister could advise the President through government decision.

In doing that, there was no breach of the separation of powers but “an exercise of it”.

No issue of general public importance arises and the interests of justice do not require the Supreme Court to hear an appeal, they ruled.