An Bord Pleanála’s decision had ‘unfortunate tone, at once defensive and circular’ 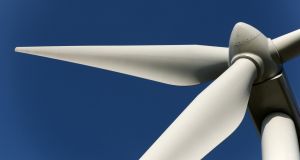 Cork County Council had in 2016 granted permission on conditions for an 11 turbine development but that was quashed in earlier High Court proceedings. File photograph: Getty

The Supreme Court has overturned An Bord Pleanála’s approval for a planned Co Cork windfarm development after finding the board erred in failing to consider submissions from a local couple concerning developing knowledge about noise impact from turbines.

The five-judge court will decide later what form of order should be made arising from its judgment, including whether to return the matter to the board for reconsideration.

Klaus Balz and Hanna Heubach, who operate a family horticulture business from their home premises at Bear na Gaoithe, Inchigeelagh, Co Cork, had appealed over the board’s permission for a windfarm of up to 11 turbines at Cleanrath, Inchigeelagh, by Cleanrath Windfarm Ltd.

The proposed development is 637m (2,090ft) from their home and they claimed the board’s decision failed to properly take into account increased noise generation by the turbines.

The case was brought against the board with Cork County Council and the developer as notice parties.

The couple, represented by David Holland SC, instructed by solicitor Joe Noonan, had argued the windfarm would result in a quadrupling of perceived loudness in the area.

Cork County Council had in 2016 granted permission on conditions for an 11 turbine development but that was quashed in earlier High Court proceedings.

The Council later granted permission for six turbines, Cleanrath appealed and there was a cross-appeal by the couple and other objectors.

An Bord Pleanála later approved a development of up to 11 turbines.

After the couple lost a High Court challenge over that approval, the Supreme Court agreed to hear an appeal.

Giving the court’s unanimous judgment on Thursday, Mr Justice Donal O’Donnell said planning authorities and An Bord Pleanála have a statutory obligation to “have regard” to guidelines issued under section 28 of the Planning Act by the Department of the Environment, Community and Local Government.

The Wind Energy Development Guidelines observed an “appropriate balance” must be achieved between power generation and noise impact, and relied on a document issued in 1996 by the Energy Technology Support Unit of the Department.

The applicants submitted material suggesting the guidelines reflected the state of knowledge in 2006, time had moved on and knowledge had evolved. They noted the Department has publicly stated the 2006 guidelines were “not fit for purpose” in fundamental respects and it was reviewing them.

The judge said the fundamental disagreement between the sides was on fact rather than a matter of law and concerned what the board actually did and intended when it had adopted its inspector’s report recommending permission.

Because there was no direct evidence from the inspector or the board, it was “not at all clear” whether the inspector and board were agreed as to what occurred in fact. The board’s decision was unclear and had an “unfortunate tone, at once defensive and circular”.

The appellants, he held, had adduced sufficient evidence to infer the inspector had considered he could not entertain submissions from them concerning whether the 2006 guidelines were adequate or fit for purpose, with the effect he discounted those submissions and treated them as irrelevant.

An Bord Pleanála must “have regard” to section 28 guidelines. Where guidelines deal with matters of technology or science, the knowledge in that field may develop and any party is entitled to put material before a planning authority or the board suggesting the decision maker should depart from the guidelines.

He believed it was “doubtful”, for reasons including the material submitted by the appellants contained no expert report, that a decision maker who considered it would have been likely to accept it, with the effect it would not have been unreasonable to continue to give weight to the existing guidelines.

However, the problem was the submissions were rejected in full on the basis the matters contained in them were irrelevant, he said.

It is “basic” to any decision making that relevant submissions should be addressed and an explanation given for accepting them or not.

This is “fundamental”, not just to the law but the trust members of the public are required to have in decision making institutions if those concerned, and the general public, are to be expected to accept decisions with which they might profoundly disagree and with whose consequences they have to live.