Supreme Court hears appeal over slopping out in prisons

Hearing could have important implications for as many as 1,000 other cases 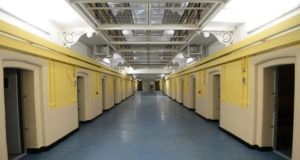 Gary Simpson is entitled to damages over the conditions he was detained in at Mountjoy Prison, his lawyers say.

The Supreme Court is hearing an appeal by a former prisoner with important implications for up to 1,000 cases concerning slopping out in prisons.

Gary Simpson spent eight months in Mountjoy Prison in 2013 in conditions that were “disgusting, brutish, inhuman and degrading” and is entitled to damages over that, his lawyers say.

The State has not appealed the High Court finding that those conditions breached Mr Simpson’s right to privacy and dignity, his counsel Michael P O’Higgins SC noted.

The High Court erred in failing to also find those conditions breached Mr Simpson’s right not to be subject to inhuman and degrading treatment, he argued.

This was particularly so because Mr Simpson was under protection, doubled up with another prisoner in a single cell with no in cell sanitation and on 23 hour lock up, he said.

Mr Simpson has an unenumerated constitutional right to be protected from inhuman and degrading treatment but he was exposed to treatment involving hardship that exceeded the level of unavoidable suffering inherent in detention, he said.

This was all forseeable in light of various reports, including of the United Nations Committee Against Torture, criticising the slopping out regime, he argued.

While acknowledging the progress made towards eliminating slopping out, he said “good intentions” do not alter the fact his client’s rights were breached.

The numbers slopping out now are estimated at about 1.3 per cent of the prison population, down from 24.8 per cent in 2012.

Mr O’Higgins said Mr Simpson was in 2013 a vulnerable prisoner detained in a cell, the total size of which was 8.43 square metres, with no access to education, training or work.

The court should imagine a situation where two adult males are locked up 23 hours a day in a space equivalent to a bedroom in a small suburban house with no toilet, sink or running water, he said.

Mr Simpson had also, over at least 11 days, shared the cell with two other prisoners. Because prison records are missing over some 20 days, it was difficult to establish exactly how many days that situation continued.

Each prisoner had a bucket and basin but none had a privacy screen and the High Court was critical of the absence of any commode type structure in the cell, he noted.

Each prisoner had to take his chamber pot from the cell and slop it out into a “slop hopper” in communal toilets on the landing which could be sometimes blocked. Some prisoners also dumped the contents into the communal sinks.

Mr Simpson suffered distress about these conditions but it was accepted there was no evidence his physical health suffered, counsel added.

The appeal is being heard by a five judge court because it raises important legal issues concerning what criteria apply for determining whether or not treatment of a prisoner is inhuman and degrading and whether damages need always be awarded for breach of constitutional rights.

The High Court’s Mr Justice Michael White had found slopping out breached Mr Simpson’s constitutional right to privacy and dignity but not his right not to be subject to inhuman and degrading treatment. Those findings were made in the context of the particular circumstances of Mr Simpson’s imprisonment.

Mr Justice White refused to award damages for the breach of the right to privacy/dignity because of his finding some of Mr Simpson’s evidence concerning his treatment was untruthful or grossly exaggerated.

He also refused Mr Simpson the legal costs, estimated at more than €1m, of the case against the State but declined to order him to pay the State’s costs due to criticism of several matters, including limited access to showers for prisoners on 23 hour lock up. The State is not disputing the finding that slopping out, on the facts of Mr Simpson’s case, breached his constitutional right to privacy/dignity.

It wants the Supreme Court to address whether damages must be paid for breach of constitutional rights or whether declarations may be more appropriate in some cases. About 1,000 other slopping out cases remain on hold until Mr Simpson’s appeal is decided.