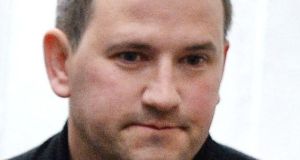 The State has advanced a “worst case” scenario about the impact of Graham Dwyer’s successful challenge over the admissibility of mobile phone data records as evidence at his trial for the murder of childcare worker Elaine O’Hara, the Supreme Court has heard.

While Dwyer accepts the High Court decision in his favour has profound consequences beyond his case, his concern is not to have the relevant law struck down, Remy Farrell SC, for Dwyer, said.

Dwyer’s “narrow” interest is to be permitted to dispute the admissibility of call data records which formed a substantial part of the prosecution case against him. Counsel said it might be possible to grant Dwyer a relief which did not amount to using a “sledgehammer to crack a nut”.

The prosecution had attributed two mobile phones to Dwyer following detailed analysis of call records over a prolonged period in order to build up a clear picture of his movements between October 2011 and 2012, he said.

Counsel said the records allowed a very detailed picture of someone’s life and activities over a period to be built up and this case showed both the “utility” of such evidence and the “degree of intrusion” in acquiring it.

Mr Farrell said the existence of “enormous” databases gives rise to the potential for abuse and “very real” concerns. It was not sufficient for the State to argue that data can be retained generally “and then worry about access later”.

He said there are alternatives to universal data retention and the UK, for example, has introduced a system of targeting data retention at particular communication service providers.

Dwyer maintains the Court of Justice of the European Union (CJEU) has already held that indiscriminate retention of data is not permissible but he accepted, if the Supreme Court considered there was a lack of clarity in various CJEU decisions, it should refer legal issues to that court.

Dwyer remains in custody and is anxious for a speedy resolution of these issues, he stressed.

Mr Farrell was making submissions before a seven judge Supreme Court opposing the appeal by the State against the High Court ruling in Dwyer’s case.

Mr Justice Tony O’Connor found sections of the Communications (Retention of Data) Act 2011 concerning access to retained data contravene EU law and the European Convention of Human Rights because there was no prior review by a court of administrative authority.

As well as being important for Dwyer’s appeal of his murder conviction, the decision has major implications for the ability of the authorities to retain, access and use information generated by phones in the investigation of serious crime.

The 2011 Act was brought in to conform with a European directive later struck down by the CJEU.

The State maintains that principles set out in various CJEU decisions do not prevent the universal retention of phone data or the access, subject to various conditions, to that data.

It says national courts are not precluded from deciding if the relevant law is a proportionate response. It says the Supreme Court should weigh rights to privacy and data protection against the rights to life and personal protection, national security concerns and protections governing attempts to access retained data.

Having done so, it says the court should find there was no breach of Dwyer’s rights and the High Court decision should be overturned. Alternatively, the Supreme Court should refer legal issues to the CJEU, the State says.

Seán Guerin SC, for the State, said the consequences of not having access to retained data for the investigation and prosecution of serious crime, including child sexual abuse, are “stark” and there was “no alternative” to accessing retained data.

He said retained data is a form of “digital witness” used to identify suspects, trace movements, support alibis and there was also a public safety aspect concerning vulnerable persons.

In Dwyer’s case, it was never suggested that Garda request for access to the call data was wrong or disproportionate and it was rather argued the problem was with the 2011 law, he said.

Paul Gallagher SC, also for the State, said, once data is retained, layers of protection apply to it before it can be accessed. Access must be requested by a Garda Chief Superintendent and the Garda Commissioner must report to the Minister for Justice concerning all data disclosure requests made by the force.

The trial judge in Dwyer’s case, Mr Justice Tony Hunt, was satisfied there was lawful and appropriate access to the phone data.