‘Slopping out’ case could have huge consequences, State argues 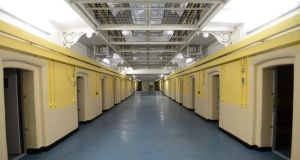 Any finding by the Supreme Court that slopping out amounts to inhuman and degrading treatment would have “huge” consequences for the State and the Mountjoy prison regime. Photograph: Bryan O’Brien/The Irish Times.

A finding that slopping out amounts to inhuman and degrading treatment would have “huge” consequences for the State and the Mountjoy prison regime, the Supreme Court has heard.

Such a finding would also have potential implications as about 1,000 cases for damages have been taken over slopping out, Paul Gallagher SC, for the State, said.

The five judge court reserved judgment on Tuesday on an appeal by former prisoner Gary Simpson who had to slop out over some eight months in Mountjoy in 2013.

Slopping out, which involves prisoners urinating, defecating and washing in basins in the absence of in cell sanitation, was condemned in 1993 by the European Committee on the Prevention of Torture. In 2010, the State began a programme of prison refurbishment with a goal of single cell occupancy and in cell sanitation.

In a High Court judgment last year, Mr Justice Michael White found slopping out breached Mr Simpson’s constitutional right to privacy and dignity but not his right not to be subject to inhuman and degrading treatment.

Those findings were made in the context of the particular circumstances of Mr Simpson’s imprisonment — a protected prisoner doubled up in a single cell with no in cell sanitation and on 23 hour lock-up. Because of his finding Mr Simpson told some untruths about his treatment and grossly exaggerated some of his evidence, Mr Justice White refused damages.

He also refused Mr Simpson his legal costs, estimated at more than €1 million, against the State but declined to order him to pay the State’s costs arising from his criticism of matters including limited access to showers for prisoners on 23 hour lock up.

The State is not appealing the finding that slopping out breached Mr Simpson’s right to privacy and his dignity but opposes Mr Simpson’s appeal over the rejection of his claim his unenumerated constitutional right not to be subject to inhuman and degrading treatment was also breached.

In arguments on Tuesday, Mr Gallagher said intent is a “critical” factor when considering whether or not there was a breach of the right not be subject to inhuman and degrading treatment.

While intent to degrade is not a prerequisite for a finding of a breach of Article 3 of the European Convention on Human Rights, which prohibits inhuman or degrading treatment, the presence or absence of any such intent is an important factor, he said.

The State authorities did not set out to demean or humiliate Mr Simpson or take advantage of detention to violate his rights, he said.

Rather, he was among a small group of prisoners who had to slop out while refurbishment was going on in Mountjoy Prison.

A “very high threshold” must be met to establish a breach of the right not to be subject to inhuman and degrading treatment, he argued.

Any such finding would have “huge consequences” for the State and, even accepting it would apply to a “historic” practice because slopping out has almost been eliminated, the State would be likened internationally to other countries operating savage prison regimes.

The High Court’s declaration the right to privacy/dignity was breached was adequate vindication of Mr Simpson’s constitutional rights, he argued.

Brian Murray SC, also for the State, said there was no claim Mr Simpson suffered personal injury due to slopping out and his claim of loss was confined to distress and upset.

Damages should not be awarded for distress due to breach of privacy where was no intent to harm, he argued.

When counsel argued the situation was unforeseen, Ms Justice Iseult O’Malley remarked that Mountjoy was “in the state it was in from the foundation of the State”.

In closing arguments for Mr Simpson, Paul O’Higgins SC argued a declaration was not a sufficient vindication of his client’s rights and he was entitled to damages.