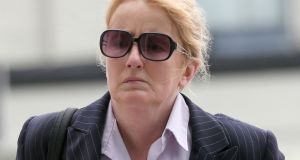 Eve Doherty previously had the balance of her three year sentence suspended by the Court of Appeal. File photograph: Collins Courts

A detective garda has lost her Supreme Court bid to overturn her conviction for harassing a State solicitor by sending abusive communications.

In dismissing Eve Doherty’s appeal, a five judge Supreme Court clarified the law concerning harassment but stressed it is “highly desirable” the relevant 1997 law be updated to provide “effective” statutory protection from harassment.

Developments in communications and technology since 1997 only emphasise “the many ways in which people, sometimes themselves disturbed, and sometimes simply malicious, can torture their fellow human beings and the dreadful psychic toll that such behaviour can exact on those who have the misfortune to be the victim of it”, Mr Justice Donal O’Donnell said.

Ms Doherty, aged in her fifties, of Blackglen Road, Sandyford, Dublin, previously had the balance of her three year sentence suspended by the Court of Appeal.

Her 2017 trial at Dublin Circuit Criminal Court heard that, over an 18-month period, letters and emails were sent to the home and place of work of State solicitor Elizabeth Howlin scurrilously calling her “corrupt”, an “incompetent useless hobbit” and a “two-faced b***h”. leaflets were also placed on cars and pillars in her neighbourhood.

At the time in question, 2011-2013, Ms Howlin worked with the Director of Public Prosecutions (DPP) where she was involved in deciding whether or not to direct criminal prosecutions and Doherty was a detective sergeant in the Garda crime and security division. The court heard Ms Howlin didn’t know Doherty until the trial and that Doherty was then in a relationship with Ms Howlin’s ex-partner.

Doherty was sentenced to three years imprisonment in January 2018 after being found guilty by a jury on a charge of harassing Ms Howlin between September 2011 and March 2013. She denied the charge and was acquitted on two counts of making false statements.

In July 2019, the Court of Appeal suspended the remainder of her sentence after finding a straight three year sentence in this case involved an error in principle.

Doherty’s Supreme Court appeal centred on construction of section 10 of the Non-Fatal Offences Against the Person Act 1997 which creates the offence of harassment.

Section 10 provides, inter alia, that any person who, without lawful authority or reasonable excuse, by any means including a phone, harasses another “by persistently following, watching, pestering, besetting, or communicating” with him or her, shall be guilty of an offence.

In judgments on Friday, all five Supreme Court judges agreed Doherty’s conviction should be upheld on the wrong of harassment of the victim through communicating with her.

They found it was open to the jury, both on the evidence and the manner in which the trial judge instructed the jury, to conclude Doherty’s conduct amounted to communicating with the victim as provided for in section 10.

Mr Justice Peter Charleton, who gave the main judgment on the communication issue, noted an “email blitz” was anonymously directed by the accused whereby the “most nasty and derogatory things” were said about the victim.

The single instance event of leafleting an entire neighbourhood was of itself a “persistent interference with the human right of the victim to be left in peace”, he said.

“The point of all of this activity was communication,” he said. Communication with the victim occurred, it was intentional and “on any common sense and shrewd interpretation, was to undermine the life of the victim”.

A majority of four - Mr Justice O’Donnell, Mr Justice John MacMenamim, Ms Justice Iseult O’Malley and Ms Justice Marie Baker, agreed what happened in this case was not, as the prosecution had contended, harassment through “besetting”.

Three of that majority reached that decision on the basis, as set out in a detailed judgment of Ms Justice O’Malley focussing on the besetting issue,that besetting requires some physical presence or physical actions, albeit at a distance.

Mr Justice O’Donnell agreed the version of besetting advanced by the prosecution in this case was inadequate and that physical action is necessary to constitute besetting under section 10 but said he could not “definitively” agree that a victim is beset by someone who stations themselves with hostile intent around them or the place where they may be.

It would also be necessary to satisfy requirements of persistence and establish subjective and objective elements of the offence, he said.

On the besetting issue, Mr Justice Charleton said his view was the victim was “beset” by “persistent communications” which beset her life with trouble.

All five agreed “besetting” is an “arcane” word in the modern era and unsuitable for use in a criminal statute and that it is “highly desirable” that section 10 be updated.