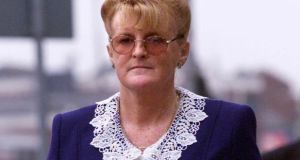 Catherine Nevin was given a life sentence in April 2000 after being found guilty of murdering her husband Tom Nevin. Photograph: Collins

The Supreme Court must decide whether or not the late Catherine Nevin’s conviction for the murder of her husband can be relied on by his family in their bid to ensure her estate does not benefit from his.

Lawyers for Ms Nevin’s estate told the court on Tuesday the conviction does not amount to proof of her guilt of Tom Nevin’s murder and was proof only she was “found guilty”.

Ms Nevin died in a hospice last February having been given compassionate temporary release from her life sentence.

The disinheritance case is being opposed by the executors of her estate.

On Tuesday, the Supreme Court heard an appeal by the estate arising from a Court of Appeal finding the criminal conviction can be relied on in the civil disinheritance proceedings as proof of Ms Nevin’s guilt of the murder of her husband in March 1996.

Members of Mr Nevin’s family were in court for the appeal on which the five-judge court, presided over by the Chief Justice Mr Justice Frank Clarke, reserved judgment.

In submissions, Coleman Fitzgerald SC for the estate said Ms Nevin always denied involvement in her husband’s murder and had intended to give evidence to that effect in the civil proceedings.

There was a procedural flaw in manner in which the family had sought orders permitting them to rely on the conviction, he said.

A conviction order is proof only of itself and that a person was “found guilty” but was not proof of their guilt, counsel submitted. In that context, the conviction order amounted to “hearsay”.

George Brady SC, for the family, said the “undisputable fact” was Catherine Nevin had been convicted in 2000 of the murder after a 42-day trial in the Central Criminal Court.

That was the third trial, two earlier trials having been aborted, he said.

He rejected the estate’s arguments of a procedural flaw in the family’s preliminary application seeking orders allowing them to rely on the criminal conviction for their civil case.

When making the preliminary application, he was acutely conscious of a lacuna in the Succession Act but had not argued that point and instead relied on the common law in seeking the order to rely on the criminal conviction, Mr Brady said.

Mr Nevin died intestate and the couple had no children, which generally means the entire estate goes to the widow.

Mr Nevin was murdered in 1996 at Jack White’s Inn in Brittas, Co Wicklow, the pub jointly owned by the couple. Mrs Nevin re-opened the pub for a short time before it was sold in 1997 for IR£620,000.

After Nora Nevin died intestate in 1999, her case was taken over by Tom Nevin’s brother and sister, Patrick Nevin and Margaret Lavelle, who were in court on Tuesday.