Couple given one year to demolish house built without permission 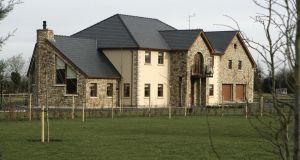 The Supreme Court has given a Co Meath couple 12 months to demolish a house they built more than a decade ago in “flagrant breach of the planning laws”.

Meath County Council, which brought the case against Michael Murray, a plumber, and his wife Rose, said it would not apply for legal costs against them if the house is demolished.

The Murrays built the 588sq m house in 2006 at Faughan Hill, Bohermeen, Navan on land they bought from a farmer.

The court heard the previous owners had agreed with the council to sterilise the rest of the site against further development on the basis one house would be built on the land for a member of the farmer’s family. Before building their house, the Murrays applied for, but were refused, permission for a 283sq m dormer bungalow for them and their three children on part of the land.

Despite this, they built what a judge described as an “imposing” structure nearly double the size and without planning permission.

The council brought enforcement proceedings which resulted in a High Court decision in 2010 that they should demolish within two years.

The couple argued in the High Court the house was part of land which Mr Murray farmed. The High Court judge said the argument was “preposterous” and they had “brought this on themselves”.

They appealed but a five-judge Supreme Court upheld the High Court decision on Friday. In their appeal, they argued, among other things, the demolition order was incompatible with their property, family, parental and private ownership rights under the Constitution, and similar rights under the European Convention on Human Rights.

Giving the Supreme Court’s decision, Mr Justice William McKechnie said the court was mindful of the hardship its decision would cause to the Murrays but it could not lose sight of the fact they had been living for over a decade in an unauthorised development built in flagrant breach of the planning laws.

One of the principal issues the court focused on was of inviolability of the family home.

Mr Justice McKechnie referred to a decision of then-High Court, now Court of Appeal judge Gerard Hogan in relation to a chalet built in a scenic part of Wicklow without planning permission. That case related to Katie Fortune who lived in the chalet at Lough Dan, Roundwood, for 14 years with her two children.

In his 2013 judgment in that case, Mr Justice Hogan refused to grant a demolition order based on the home inviolability provision of the Constitution.

The Supreme Court said Mr Justice Hogan also drew on a Supreme Court decision concerning the requirement that search warrants must be sworn by an independent person rather than a Garda officer close to an investigation.

That case related to Ali Charaf Damache (50), an Algerian-born Irish citizen living in Waterford, who was wanted in the US in connection with an alleged terrorist conspiracy by an American Muslim convert, Colleen LaRose, known by her online name as “Jihad Jane”.

Mr Justice Hogan found the findings in the Damache case meant the constitutional inviolability of a dwelling was “a free-standing, self-executing guarantee which applies to both civil and criminal proceedings and to both State and non-State actors alike”.

Mr Justice McKechnie said he did not believe the Damache decision should be read in this way.

He said Mr Justice Hogan had elevated the constitutional protections afforded by the inviolability provision to “too high a position of prominence” in the context of applications to demolish unauthorised buildings.

Mr Justice McKechnie rejected the Murrays’ submission that the High Court failed to give proper weight to the personal hardship of a demolition order. The Murrays were fully aware of the need to obtain permission and the Supreme Court agreed with the High Court’s view what they did was “particularly flagrant and completely unjustified”.