Members of 1916 Relatives Association in packed court for appeal 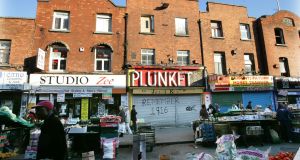 A three judge Court of Appeal has begun hearing the Minister’s appeal over the High Court decision to declare that various buildings and sites on and around Dublin’s Moore Street are a 1916 Rising battlefield site comprising a national monument. Photograph: Cyril Byrne.

The State has argued it was a “bridge far too far” for the High Court to declare that various buildings and sites on and around Dublin’s Moore Street are a 1916 Rising battlefield site comprising a national monument.

The High Court was not entitled, in judicial review proceedings, to declare an “entire precinct” of the city a national monument, with “serious consequences” both for the property rights of a company intending to develop the site and for the Minister for Arts and Heritage, argued Michael McDowell SCfor the Minister.

A three judge Court of Appeal has begun hearing the Minister’s appeal over the High Court decision.

Members of the 1916 Relatives Association and supporters of the group were in the packed court for the appeal.

In his 399-page judgment delivered in March 2016, Mr Justice Barrett granted various orders and declarations to Colm Moore, a nominee of the 1916 Relatives Association, who brought the proceedings against the Minister aimed at protecting the Moore Street site.

The judge granted orders preventing works to the buildings and locations at issue after declaring them to constitute a 1916 Rising battlefield site comprising a national monument.

He said the 1916 Rising is “unique” and the GPO occupies an “iconic” position in Irish history, making what happened to the men and women who fled the GPO after it was ablaze following shelling by British troops “a matter worthy of unique commemoration”.

The judge said the Minister could carry out essential conservation works to a terrace on Moore Street which was the final headquarters of the Rising leaders before their executions.

The Minister had disputed any such wider battlefield site existed and argued it was adequate to protect the terrace at Nos 14-17 Moore Street, where it is intended to establish a 1916 Rising Commemorative Centre.

In submissions on Tuesday, Mr McDowell said this was not a situation where the Minister acted “irrationally” or unreasonably in not extending a protection order beyond those buildings on Moore Street.

While Mr Justice Barrett’s imagination was “clearly taken” by his visit during the case to Moore Street, Moore Lane and O’Rahilly Parade — where the wounded Michael Joseph O’Rahilly died — that did not entitle him to declare the area a national monument, counsel said.

It was not appropriate, in deciding a complex issue of this kind, for the judge to tour an area of the city and to be “emotionally hugely impressed” by the memory of what he had read about that area, and then to say nobody could reasonably doubt this was a national monument, he said.

As a result of that “very clear” determination, the lands are “semi-permanently frozen” and the Minister is effectively a caretaker and custodian of city centre lands, he said.

The legislature could not have intended a decision on a national monument could be made based on the historicity of an area, Mr McDowell argued.

There must be a “respectful reluctance” on the part of the High Court to embark, particularly via judicial review rather than a full plenary hearing based on oral evidence and where everybody’s interests including the landowners are taken into account, on determining the status of lands for public purposes at the instance of people who are not owners of those lands, he said.

The High Court declaration also covers some buildings erected during the 1960s on the site of other buildings destroyed during the Rising, he said. It was “a huge stretch of the legal imagination” to say such buildings were a national monument because some of those involved in the Rising and others “fled through it a hundred years ago”.

If that was the case, it could be contended many other precincts which were scenes of battles during the Rising, including around the South Dublin Union and Mount Street Bridge, were national monuments.

The Four Court itself was occupied in 1916, Mr Justice Micheal Peart observed.

In exchanges with Mr Justice Gerard Hogan, Mr McDowell agreed if, for example someone moved to bulldoze the Clonmacnoise site and the Minster failed to act, the courts probably could intervene.

The appeal court was told last July, when dealing with preparatory issues for the appeal, that some of the buildings and sites involved had been sold by a development company, Chartered Land, to Dublin Central Limited Partnership, acting through its general partner Dublin Central GP Ltd, Grand Canal Square, Dublin.

Chartered Land was a notice party to the High Court case due to its having been granted, several years ago, planning permission for a major residential and commercial development in the area around Moore Street.