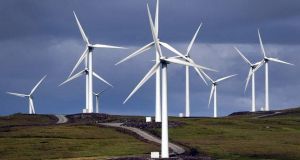 The High Court today overturned a decision of An Bord Pleanála granting permission for two wind farm developments in Co Roscommon. Ms Justice Mary Finlay Geoghegan will next week consider an application to have the Board reconsider the application for permission in light of her findings.

Expert reports prepared for local residents and the Department of Arts, Heritage and the Gaaltacht, had considered the developments posed a “significant” risk to international habitats, groundwater systems and local flooding, the court heard.

The judicial review challenge to the permission was brought by Eamon (Ted) Kelly, Carrowkeel, Dysart, a farmer and member of the Wind Turbine Action Group South Roscommon. The Department, a notice party to the case, supported Mr Kelly’s challenge.

Mr Kelly sought orders quashing decisions of the Board of September 2013 granting permission to Gaeltech Energy Developments Ltd for erection of 16 wind turbines at Croan, Gortaphuill, Mullaghardagh, Dysart and 19 turbines at nearby Milltown, Skeavally, Twanagh, Tobermacloghlin, Co Roscommon. Permission is for turbines with a hub height of 85m and rotor diameter of 100m.

Today, Ms Justice Finlay Geoghegan upheld arguments the Board failed tolawfully conduct an appropriate assessment of the proposed developments, in accordance with the Habitats Directive. Due to that failure, the Board had no jurisdiction to grant permission for the developments, she ruled.

The judge said adjourned the matter to next week when she will hear submissions on what formal orders should be made in the case, including to have the matter remitted to the Board for reconsideration in light of the court’s ruling.

Among a series of claims, Mr Kelly alleged permission should have been refused because the surrounding environment had not been properly assessed in environmental impact statements, particularly the presence of several designated sites of national and European importance comprising special conservation and special protection areas. No proper environmental impact assessment of the impact on those sites had been carried out, it was claimed.

He claimed the development of 16 turbines at Croan is likely to impact on ten sites of conservation importance in south Roscommon, including three nature 2000 sites at Lough Croan, Four Road Turlough and the River Suck Callows, with particular concern expressed about the impact on Whooper Swans, Greenland White-Fronted Geese and Golden Plover. The second development would adversely impact on both bird and bat species, it was alleged.

The Department of Arts, Heritage and the Gaeltacht had, with some local residents, expressed concern about the developments on environmental grounds during the earlier appeals to the Board against Roscommon County Council’s decisions granting permission for them, the court heard. Following those hearings, both inspectors who conducted them recommended the refusal of permission.