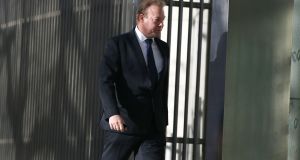 Martin Byrne (53), who claims Mr Mansfield set him up to be falsely imprisoned, said a note allegedly handed to the driver of the vehicle which he was bundled into by a gang could not have been written by the accused.

He denied a suggestion by Mr Mansfield’s defence counsel that he was “having a dig” at his client by saying this.

The alleged victim, who is now in the Witness Protection Programme, also denied a defence suggestion that he had “something to hide” when he refused to speak to a garda who arrived at the scene.

“I had nothing to hide that day. I had just been beaten up and my family’s lives were in danger,” he told the accused’s counsel.

Mr Mansfield (53), of Tasaggart House, Garters Lane, Saggart, Co Dublin, is accused of conspiring with one or more persons to falsely imprison Martin Byrne on a date unknown between January 1st, 2015 and June 30th, 2015, both dates inclusive.

He is also charged with attempting to pervert the course of justice by directing Patrick Byrne to destroy recorded CCTV footage, with the alleged intention of perverting the course of public justice in relation to the false imprisonment of Martin Byrne at Finnstown House Hotel, Newcastle Road, Lucan, Co Dublin between June 9th, 2015 and June 12th2015.

The accused has pleaded not guilty to both offences.

Mr Byrne has told the three-judge court that Mr Mansfield (53) arranged meetings with the New IRA and the INLA to “assist” in getting back parts of his family’s former property portfolio.

The witness gave evidence that Mr Mansfield was “a couple of feet away” when he was taken prisoner by a gang of seven men, which included former INLA man Dessie O’Hare and former republican paramilitary Declan Duffy, after a meeting at a warehouse at Keatings Park in west Dublin. Mr Byrne testified that he believed Mr Mansfield had set him up.

On Thursday, Mr Byrne described the day he was kidnapped by O’Hare, Duffy and five other men as the “day that changed my family’s life and my life forever”.

Under cross-examination for a fourth day from defence counsel Bernard Condon SC, for Mr Mansfield, Mr Byrne said he was put into a car at Keating’s Park in Saggart before someone handed a torn piece of paper with handwriting on it to the driver of the vehicle, which he believed had his home address on it.

Mr Byrne denied this proposition saying: “It wouldn’t be Jimmy’s handwriting as he didn’t write”.

Mr Condon asked the witness if he was “having a dig” at his client by saying this, which Mr Byrne denied.

The witness said he was struck two times by a man who had a tattoo on his neck inside the car after the meeting at Keatings Park and later threatened by the group at The Towers, his home address.

The seven men and Mr Byrne then travelled in convoy in a Ford Mondeo, a Honda and a white Transit van to the Towers. When they went inside, having broken through a security gate, Mr Byrne’s wife was there with their son.

All seven men went into Mr Byrne’s home for up to 15 minutes, said Mr Byrne. O’Hare then asked the witness which house belonged to convicted fraudster James O’Gorman.

The former security boss testified last week that €2,500 per week in protection money was being paid by Mr Mansfield and O’Gorman to the Real IRA in order to protect the accused from two Traveller gangs, who claimed they were owed money from the accused.

Mr Byrne said that he later saw a plain clothed garda coming in the gateway of the property on a CCTV monitor inside O’Gorman’s apartment and O’Hare told him to get rid of him or he would “get a bullet in the head”.

Mr Byrne went out to the gardaí and told them everything was okay when he was asked what was going on. “One garda asked me what was the blood on the ground. Then my wife came out and got emotional and hysterical,” he said.

O’Gorman came out of his townhouse when armed detectives arrived at the Towers and the witness said he approached the fraudster and told him that he believed he “had caused this”.

Counsel for the accused asked Mr Byrne why he had refused to speak to the garda who arrived at the scene and instead asked to speak to Detective Sergeant Tony Harty from the Special Detective Unit. “I wasn’t prepared to speak to any garda at that stage,” he replied.

The lawyer told the witness that the original gardaí had arrived at the Towers at 12.20pm and Det Sgt Harty did not arrive until 1.56pm.

Mr Condon asked the witness if he had something to hide at the time. “I had nothing to hide that day. I had just been beaten up and my family’s lives were in danger,” he said.

The key prosecution witness said that he did not have a formal discussion with Det Sgt Harty but the detective was someone who seemed to care about what had happened to him and his family.

Mr Condon again asked the witness why he had a desire to only speak to Det Sgt Harty. In reply, the witness said he knew the detective and did not want to explain everything that had gone on since the raid on the Finnstown Hotel in 2015 to someone who did not know anything.

The trial continues on Monday.