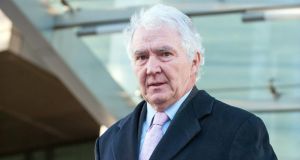 Procedures requiring Anglo Irish Bank loans of more than €25 million to be referred to a non-executive director appeared not to have been followed in the case of the “Maple 10”, Dublin Circuit Criminal Court has heard.

The trial of three former Anglo directors heard credit procedures stated such loans had to be presented to a non-executive director for “noting”.

But a sample form relating to one of the Maple 10 loans shown to the court featured an “N” in a box asking if a non-executive director needed to be informed.

Michael O’Sullivan, Anglo’s former divisional lending director, said he believed the forms were not noted because the board had been informed of the “principles in the documents”.

During cross-examination, Michael O’Higgins SC, for former Anglo chairman Seán FitzPatrick, said a “broad brush” was not enough. He said “the devil is in the detail” and it was the detail that gave rise to the criminal charges against Mr FitzPatrick, who was a non-executive director.

Addressing Mr O’Sullivan, Mr O’Higgins said the notifying of a non-executive director of a loan was a “safeguard” and it was “departed from” in this case because “it was believed the board knew”. He added that had the non-executive director notification operated, “the person who has to answer this charge” might well have had the detail put before him.

Mr FitzPatrick (65) of Greystones, Co Wicklow; William McAteer (63) of Rathgar, Dublin; and Pat Whelan (51) of Malahide, Dublin, have been charged with 16 counts of providing unlawful financial assistance to 16 individuals in July 2008 to buy shares in the bank, contrary to section 60 of the Companies Act.

Brendan Grehan SC, for Mr Whelan, said the 25 per cent personal recourse imposed on the “Maple 10” was not unusually low for the bank and only five of the top 25 “loan connections” in 2008 involved full recourse. Full recourse allows the bank to pursue the value of all money owed, including to pursue any assets of the borrower, in the event of default.

Mr O’Sullivan said he could not confirm that, but in the main Anglo was “very stringent on transactions”.

Mr O’Sullivan agreed with Mr Grehan that the period from September 2008 to December 2008 was “incredibly turbulent for the bank and for the world” and people were working under extraordinary pressure.

The court heard Mr Whelan had travelled extensively to attract funding for the bank, visiting locations such as New York, London, Stockholm and Frankfurt.

Property developer Gerard Gannon told the court he had bought Anglo shares before he was approached by Mr Whelan about the Maple transaction.

Mr Gannon said he sold none of the shares acquired through the Maple transaction and subsequently purchased more shares through the bank’s private finance arm on his own initiative.

Asked about his view of Mr Whelan, Mr Gannon replied: “I found all the people who worked in Anglo to be honest and truthful in the same way I’d like to think of myself.”

Property developer Gerard Maguire told the court he had rarely engaged in share dealing and knew little about contracts for difference when the Maple proposal was put to him.

He said he had good experiences with Anglo and that while “I was not a professional investor or a regular investor”, he liked the bank. If all went well, he saw potential for a profit on the deal.


Snapshots:
- The trial heard that under internal Anglo procedures, loans in excess of €25 million had to be shown to a non-executive director for “noting”. But on a sample form related to one of the Maple 10 loans shown to the court, a box asking if a non-executive director needed to be informed was marked “N”. Under cross-examination by Michael O’Higgins, for Mr FitzPatrick, Michael O’Sullivan said it was because it was believed the board had already been informed of the “principle” in the documents and understood their “broad terms”.


- Asked by prosecuting counsel Úna Ní Raifeartaigh who had made the decision on the Maple 10 loans, Mr O’Sullivan said: “The structure of the transaction was agreed elsewhere.” Did the credit committee decide, he was asked? “The decision had been taken by the board.”


- Gerard Maguire was on holiday in the south of France when he received a call from Pat Whelan in July 2008. Mr Whelan told him Anglo’s share price was “under attack” and the bank needed his assistance to “inspire a bit of confidence” in the bank. The next day, Mr Whelan and Mr Drumm flew to Nice to meet Mr Maguire. At a meeting, the developer told the court, Mr Drumm said the bank would provide a loan facility of up to €60 million to Mr Maguire so that he could invest in the bank’s shares. Mr Maguire said he was told the financial regulator knew about the transaction and approved.


- Gerard Gannon told the court he was approached by Anglo in July 2008 and invited to buy shares in the bank. Ms Ní Raifeartaigh showed the witness an internal Anglo memorandum from July 2008 which stated that “Gerry Gannon has approached us seeking a share dealing facility”. “Did you approach the bank,” counsel asked. “No,” Mr Gannon replied.


- Asked by counsel for Pat Whelan, Brendan Grehan, how he viewed Mr Whelan, Mr Gannon said: “I always found all people who worked in Anglo honest and truthful in the same way I’d like to think of myself.”


- Niall Tuite said that on Christmas Eve 2008 he approached Pat Whelan and said he was “dissatisfied” after learning that the terms on the Maple 10 loans had been changed. “I indicated I wanted the issue elevated to the highest levels in the bank,” Mr Tuite said. Mr Whelan said he would speak to the executive chairman, Donal O’Connor. A short time later, Mr Whelan came to Mr Tuite’s office and told him the matter was in hand and he didn’t “need to worry about it any more”. In January 2009, new facility letters were sent out which reinstated the original recourse terms.