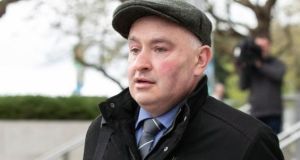 Patrick Quirke’s appeal of his conviction for the murder of Bobby Ryan began on Tuesday. File photograph: Collins Courts

Tipperary farmer Patrick Quirke was convicted of the murder of a popular DJ on circumstantial evidence, some of which should not have been heard by the jury, the Court of Appeal has been told.

Quirke (51), of Breanshamore, Co Tipperary, was convicted last year of the murder of father-of-two Bobby “Mr Moonlight” Ryan (52) at Fawnagowan in Tipperary.

Beginning his appeal on Tuesday, Bernard Condon SC for Quirke told the three-judge appeal court that there are 52 grounds of appeal and the hearing will take four days.

Outlining his arguments he said his client did not receive a fair trail. Evidence was introduced that wasn’t properly proved and he complained that prejudicial comments by gardaí during interviews with Quirke should not have been heard by the jury.

Mr Condon said that the circumstantial case relied on blocks of evidence that supported one another and if one of those blocks is removed, “there is a serious question over the overall verdict.” The trial was, counsel said, unsatisfactory, and “the remedy for an unsatisfactory trial is a satisfactory trial, which I say I am entitled to.”

Mr Ryan disappeared on June 3, 2011 after he left the home of Mary Lowry early in the morning. His badly decomposed body was discovered in a disused, underground tank on April 30th, 2013, on farmland owned by Ms Lowry and leased by Quirke.

Quirke had previously had an affair with Ms Lowry and the prosecution argued during his trial that he murdered Bobby Ryan so he could rekindle their affair.

Focusing on Ms Lowry’s evidence in the trial, Mr Condon said that she had presented herself during Garda interviews and in her evidence in court as vulnerable and Mr Quirke as controlling. This was, he said, unsupported by any other evidence and was coming from a woman who Mr Condon described as an “extraordinarily compromised witness”. She was, counsel said, allowed to pick and choose what prejudice she wanted to advance on Mr Quirke, including an accusation that he had assaulted her in 2010. Counsel added: “That would be bad enough but the guards took ownership of that and ran with it like demons.”

There was clear animus and bitterness between Ms Lowry and Mr Quirke, the barrister said, and gardaí should therefore have treated her statements with caution.

He added that gardaí should have been more circumspect in accepting what she told them and should not have adopted the position in later interviews with Pat Quirke that Ms Lowry was vulnerable and he was controlling. The garda approach, he said, had allowed prejudicial evidence to be put before the jury. In particular he complained of a comment by interviewing gardaí that Quirke had “cash on demand and sex on demand” from Mary Lowry. This comment had generated tabloid headlines, counsel said, because it was “striking”. But he said it was unfair and the trial judge should not have allowed it to go to the jury.

Mr Condon said the prosecution also relied on a suggestion that Quirke was financially dependent on Ms Lowry, but no forensic accountant was brought in to look at their accounts. He said the jury was invited to draw inferences from the fact Mr Quirke and Ms Lowry had jointly invested in contracts for difference (CFDs) and that he was leasing her land while claiming a single farm payment.

The suggestion was made that this was evidence of Mr Quirke doing something wrong, Mr Condon said, but the prosecution did not call any expert witnesses to give evidence on CFDs or single farm payments. Mr Condon also complained that “tittle tattle” regarding “who looked crooked at who” at Lowry family get-togethers was heard by the jury.

During the trial there was a difference of opinion between pathologists. Former deputy State pathologist Dr Michael Curtis said the most likely cause of Mr Ryan’s injuries was impact with a motor vehicle, while former Northern Ireland State pathologist Prof Jack Crane said there was “no real evidence to support this”. Prof Crane said he had seen similar injuries caused by blunt force trauma with a heavy weapon such as a baseball bat.

Lorcan Staines SC for Mr Quirke told the Court of Appeal that the defence had to call Dr Curtis because the prosecution refused to call him and the trial judge refused to compel the prosecution to call him. Mr Staines said Michael Bowman SC for the prosecution had taken advantage of being allowed to cross-examine Dr Curtis to introduce speculation to suggest that Bobby Ryan was “lured” to a cowshed to be murdered in an area that would be easy to clean up. Mr Staines said the prosecution would not have been allowed to introduce such speculative evidence if they had called the pathologist and to do so under cross-examination was “unfair and wrong”.

Entomologist Dr John Manlove told the trial that a fly larva found on Mr Ryan’s body had been laid at least 11 days prior to the body being discovered. Engineer Michael Reilly told the trial that the tank that held Mr Ryan’s body was airtight when closed and covered with cow droppings left by cattle that were grazing in the area. The prosecution argued that the presence of the larva showed Quirke had inadvertently let flies into the tank when checking on the body at least 11 days before he staged the discovery of the body. Mr Staines on Tuesday said it “beggars belief” that then Deputy State Pathologist Dr Khalid Jaber took only one larva for the entomologist to examine.

There were, Mr Staines said, multiple flies in various stages of development on the body. He also said that the infestation could have been caused by a flood some weeks earlier that caused water to run into the tank from a pipe. He pointed out that Dr Manlove had accepted that the flood could have caused an opening large enough for flies to get in and argued that the evidence was not admissible because the only reasonable explanation was the one offered by the defence as opposed to the “highly speculative theory” put forward by the prosecution.