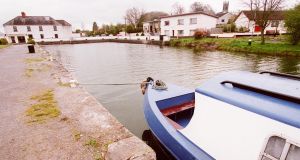 The ducks had be introduced to brighten up Edenderry Harbour.

Locals have been forced to remove ducks from a harbour in Co Offaly following a mysterious spate of duck decapitations in recent days.

Members of Edenderry’s tidy towns committee were horrified to discover the heads of mallard and donated farmyard ducks at the harbour this week.

Independent Cllr Noel Cribbin said the ducks had be introduced to brighten up the area and provide a focal point for young and old to congregate.

According to Cllr Cribbin, who first introduced the ducks with the help of Frank Carroll, 22 of the 40 ducks are gone and a number of heads have been found around the harbour in recent days.

“Since the ducks were introduced to the harbour some years ago they have brought nothing only happiness and contentment from the dozens of kids, parents and grandparents who have come to feed them over the years,” Cllr Cribbin remarked.

He is convinced the birds were decapitated with a sharp implement as there was no sign of any animal marks on the heads and the remainder of the ducks were missing. Cllr Cribbin said the animals are very tame, “the farmyard duck cant fly, so he is a sitting duck- literally,” he remarked.

“If they were taken by a mink or pine-martin whilst they would be disappointed it would be accepted as nature’s way but to find the heads of the ducks on the canal bank is sickening to all involved,” he said.

He said “they(Mr Harding and Mr McCreanor) are sick to the pit of there stomach’s that all there hard work to build up the wildlife family has been wiped out by some lousy b-----ds.”

The remaining ducks will now be removed from the harbour for safe keeping, explained Cllr Cribbin, who added, “in this day and age when you can go down to the butcher and get a cooked chicken- it’s just badness.”

He said anyone with information in relation to the killings can make contact him in confidence or the Gardaí in Edenderry who have been made aware of the situation.