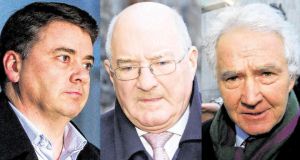 A former Anglo Irish Bank official who was asked to prepare 10 identical loan facility letters for the so-called Maple 10 in July 2008 has described the request as “very unusual” and said it never happened “before or since”.

Giving evidence at the trial of three former Anglo directors at Dublin Circuit Criminal Court, Lorcan McCluskey also said he refused to sign a letter which he said altered the conditions of the Maple 10 loans and weakened the bank’s position.

Mr McCluskey said that, in October 2008, he was asked by his line manager to amend facility letters which had been sent to the Maple 10 investors the previous July, when they were offered loans of up to €60 million to buy Anglo shares.

Mr McCluskey, then an associate director of lending, said he voiced his “discomfort” with the request because in effect it meant the loans would be non-recourse. Facility letters sent to the borrowers in July that year set the recourse – the amount the borrowers would have to pay if the share price went to zero – at 25 per cent of the value of the loan.

Asked, in relation to the original July letters, how unusual it was to be asked to prepare 10 identical loan facility letters, the witness said: “It never happened before or since, so it’s very unusual.”

Seán FitzPatrick (65) of Greystones, Co Wicklow; William McAteer (63) of Rathgar, Dublin; and Pat Whelan (51) of Malahide, Dublin, have been charged with 16 counts of providing unlawful financial assistance to 16 individuals in July 2008 to buy shares in the bank, contrary to section 60 of the Companies Act.

The trial heard that, in July 2008, Mr Whelan and then Anglo chief executive David Drumm travelled to Portugal to meet developer Joseph O’Reilly. Mr O’Reilly told the court that, over lunch in Faro, he was told a person had a large investment in Anglo and this was driving down the bank’s share price. The bank wanted to unwind the holding and asked Mr O’Reilly to buy 1 per cent of the bank’s shares. The meeting took less than 90 minutes and ended with Mr O’Reilly agreeing to the proposal.

According to the developer, he took “comfort” from the fact Anglo had received legal advice from Matheson Ormsby Prentice and that investment bank Morgan Stanley would be involved in the transaction. He also understood the regulator was “on board”.