Man to stand trial in 2016 over Finnstown House explosives 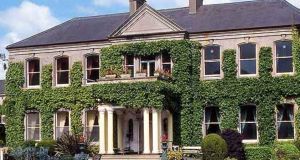 A 55-year-old man will stand trial at the Special Criminal Court in 2016 for the possession of explosives at Finnstown House Hotel in Lucan, Co Dublin in May.

Samuel Devlin, who is originally from Northern Ireland but has lived in Dublin for a number of years, was charged before the non-jury court last May after his arrest by members of the Special Detective Unit.

Solicitor Alison O’Reilly this morning told the court the accused man, who was served with a book of evidence, was seeking a date for trial.

Presiding judge Ms Deirdre Murphy said the court would fix February 2nd, 2016 for the trial, which is expected to last four weeks.

She told Mr Devlin that if he intended to rely on the defence of alibi he must notify the prosecution within 14 days and furnish the relevant names and addresses.

Ms Justice Murphy said the accused should not without leave of court call anybody to give evidence on his behalf unless 21 days before the day of the trial he gives notice of their intention to do so.

Mr Devlin, with an address at Golf Suite, Finnstown House Hotel, Lucan, Co Dublin is charged with the unlawful possession of the explosive substance Pentaerythritol Tetranitrate (PETN) at the same address on May 11th, 2014.

He is also charged with membership of an unlawful organisation within the State, namely Óglaigh na hÉireann, otherwise the Irish Republican Army, otherwise the IRA on May 11th, 2014.

Residents take court action over development of ‘The O’Rahilly’ site 15:05
PSNI issues almost 1,500 fines for breaches of Covid-19 rules 14:58
No basis for talks on a new public service pay deal, says union chief 14:56
Government to consider inquiry into historical child abuse in St John Ambulance 14:49
Taoiseach says he is opposed to curfews as a way of controlling Covid-19 14:35