Man sentenced to seven years for causing deaths of sisters 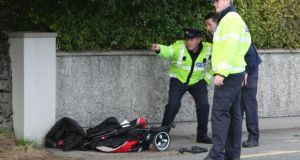 A child’s buggy at the scene of the accident on the Milltown Road outside Tuam in October 2012.

A 41-year-old man with a lifelong history of epilepsy has been sentenced to seven years in prison with the final three years suspended, and disqualified from driving for 20 years, for causing the deaths of two baby sisters near Tuam two years ago.

Two-year-old Kate Gilmore and her 12-week-old sister Grace, were out for a stroll with their father John, and were both asleep at 12.35pm when their twin buggy was hit head-on by a Toyota Avensis car which had veered into the hard shoulder on the N17, near Tuam, on Sunday, October 21st, 2012.

John O’Connor, with an address at 5 Waterslade Downs,Tuam, pleaded guilty at Galway Circuit Criminal Court to a single charge of dangerous driving at the Demesne, Tuam on 21 October, 2012, which caused the deaths of Kate and Grace Gilmore.

State prosecutor, Patrick McGrath SC, told the sentence hearing yesterday that O’Connor had been involved in another collision moments beforehand where he had driven through a red light and collided with a jeep. He left the scene of that accident and was observed by other motorists swerving and driving erratically. He almost collided with a jogger on the hard shoulder seconds before his car “ploughed” into Mr Gilmore and his two little daughters.

The girls suffered “catastrophic injuries” and were rushed to hospital where they were pronounced dead a short time later. Mr Gilmore was also treated for injuries in hospital. The accused was given medication at the scene by a passing doctor who thought he was having an epileptic fit and was also removed to hospital.

O’Connor was arrested and interviewed the following day. He had no recollection of either collision.

Superintendent Gearoid Begley said the accused told gardaí during interview that he had been given medical advice not to drive in June, 2012. He told them he had suffered from epileptic seizures all his life and had brain surgery at Beaumont Hospital in 2004 to alleviate the condition. He had remained seizure-free for six or seven years and was driving during that time. Then in February, 2012, the seizures began again. He had seizures in March, April and in June, by which time he was told by his doctors not to drive until he was seizure-free for at least a year.

Victim impact statements from parents, John and Michelle Gilmore were read by Mr McGrath to a hushed courtroom. In his statement, John Gilmore said four people died that day but only two corpses were buried. He said he and his wife would have to carry the pain of their loss with them for the rest of their lives. “We had two children to put to bed on the Saturday night and had two corpses the next day,” he said.

Michelle Gilmore said in her statement that their two beautiful daughters had been cruelly taken from them and their lives were shattered forever. The family had just returned from holiday and she had suggested John take the girls for a walk so she might unpack and get the dinner ready. “I keep asking myself, why did I suggest the walk,“she said in her statement. Mrs Gilmore asked for privacy at this time as the family were still deeply traumatised by the amount of media coverage the accident attracted at the time.

O’Connor, who has been diagnosed with a borderline learning disability, with “poor executive functioning”, took the stand and apologised to the family. “I think the Gilmores must feel a million below zero and nothing I say is going to seem the right thing. Any word I say is an insult and any word is making little of the two children. I can’t put into words their loss and I want to say I am sorry,” he said.

Judge Rory McCabe offered his sympathies to the Gilmore family and said it was of particular credit to them that their statements did not contain a word of censure or bitterness towards the accused.

He said everyone accepted the accused had not set out that day to hurt anyone but his actions had devastated the entire Gilmore family. “While there is no evidence to suggest he intended to harm these two children, there is evidence that for medical reasons for which he was well aware, he ought not to have been driving that day,” the judge observed.

He imposed a seven-year sentence, with the final three years suspended, given the plea, the remorse shown by the accused and his medical condition, and he disqualified him from driving for twenty years, directing he not reapply for a driving licence until after that period had elapsed, without a medical certificate showing he was medically fit to drive.

“When asked to describe the loss of Kate and Grace I have to borrow the words of the priest at my daughters’ funerals who said, ‘John and Michelle had two kids to put to bed on Saturday night and were left with two corpses on Sunday and that is the reality of it.’ Words I thought at the time were a little insensitive and cut to the bone, but hearing them now, they are really appropriate as this is the hard cold reality of the life that has been forced on Michelle and I. “As a parent, you look forward to a long life with your children, watching your children grow up but they will never get to do the things — going to school, college, picking a career and having a full and happy life and looking after me in my old age. All those things stolen away. “It is them who suffered the most but the pain of their loss, we will have to carry with us.

“Four people died that day but only two corpses were buried. The people who suffer the most have no voice. Kate was my best friend. Grace was with us for just a short time but my love for her was so strong. I’m left with a void in my life. They didn’t deserve this. For days and weeks afterwards I asked myself, What if I hadn’t gone out that morning, or had turned back earlier or later from our walk.

Life has stood still. I just miss being a father to Kate and Grace. I was a great father to them. I miss them so much.

“Our two beautiful daughters were cruelly taken from us. I would never want another family to go through the absolute living hell we go through every day. The most unimaginable nightmare happened. I suggested John take Kate and Grace for a walk that morning and I ask myself why did I suggest the walk. Our lives have been shattered. I put one foot in front of the other every day, barely able to keep going. Time has stood still.

Kate and Grace sent us their baby brother last year. He has put a light back into our lives.

This does not in any way take away from our grief. He is our third child. There is no moving on. The only thing time does is move our babies further away from us. It does not heal. No amount of counselling will help. We are an extremely private family and the media coverage at the time deeply exacerbated our grief. I would be grateful after today if we could go back to being private individuals.”