Case, resulting in €2,000 fine, was first such prosecution taken in the State 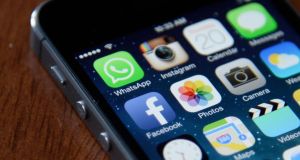 A Donegal man has avoided a jail term for criminal damage to his ex-girlfriend’s Facebook page after he admitted posting an offensive “status update” on it after taking her phone. Photograph: Andrew Gombert/EPA.

A Donegal man has avoided a jail term for criminal damage to his ex-girlfriend’s Facebook page after he admitted posting an offensive “status update” on it.

The man (30) was acquitted by a jury last month of raping and falsely imprisoning the woman in her home on the same date.

It is the first prosecution for criminal damage to a social media account. The man was charged under the Criminal Damage Act 1991 which carries a maximum penalty of ten years in prison and a €10,000 fine.

Mr Justice Garrett Sheehan asked how he was supposed to assess the damage if nothing had physically been broken. Counsel for the Director of Public Prosecutions replied that the offence had more in common with harassment than criminal damage and that the harm was reputational rather than monetary.

The judge noted there was no relevant precedence to guide him in sentencing. He called it a reprehensible offence which seriously damaged the woman’s good name but said that “fortunately” the status was quickly spotted and taken down.

He said that a financial penalty was the most appropriate and imposed a €2,000 fine.

The man, who cannot be named because of the rape charge, pleaded guilty at the Central Criminal Court to criminal damage on April 6th, 2011. He had pleaded not guilty to falsely imprisoning and raping the woman at her Donegal home in the early hours of April 6, 2011.

At a sentencing hearing today the court heard that the woman had remained friends with the man after their relationship ended in January 2011.

A local garda told prosecuting counsel Sean Gillane SC that in the early hours of April 6th, 2011, the accused went to her house to confront her over a perceived infidelity. When the accused later left the house, the woman noticed that he had taken her phone.

He went through her text messages which confirmed to him that she was in a new relationship. He then logged into her Facebook from her phone and posted a status update in her name stating that she was “a whore” who would take “any offers.”

The man was arrested shortly after. He admitted making the post and said it was because he was angry about the woman’s new partner.

Defence counsel Isobel Kennedy SC said “they were the actions of a man scorned” and that he had been drinking beforehand. She said that this doesn’t excuse what he did but might help explain it.

Counsel said his guilty plea was very helpful to the gardaí, particularly because nobody from Facebook had given a statement or was ever likely to.

Ms Kennedy said her client now has a new partner who was supporting him in court along with his parents. She said he has also secured a new job.

She submitted that he made “full and frank” admissions to gardaí­ and is very remorseful. She asked Mr Justice Sheehan to mark the case by imposing a suspended sentence.