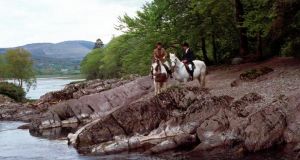 Kerry’s Sheen river is well-known for salmon fishing and a “catch and return” policy exists there.

A scheme by Kerry County Council to take water everyday from the Sheen river near its picturesque salmon leap falls, close to Kenmare, was stopped by a judge yesterday.

Judge Pauline Codd said there was a scientific doubt about the conclusions reached by experts with regard to proposed mitigation and monitoring measures for the protection of salmon stock and otter life on the river should the scheme proceed.

The judge made an order disallowing the council’s plans for taking 3,500 cubic metres of water from the river for the Kenmare Water Supply Scheme, which had already been given the green light by An Bord Pleanála.

The judge, in an 87-page reserved judgment, said the planning authority failed to rule out the scientific possibility of a potential adverse impact on fish stocks in an area where a “catch and return” policy already existed with regard to the salmon stock.

She said the relevant critical water flow threshold for the migration of salmon in the river had not been determined and gave rise to a scientific doubt as to the effects of proposed monitoring to determine appropriate thresholds.

The issues of salmon movements, minimum water thresholds, mitigation measures and the potential adverse effects on fish stocks and, by extension, on the otter population were crucial. The court was satisfied there was a scientific doubt about the efficacy of proposed mitigation and monitoring measures for the protection of salmon.

Danny O’Connor, a farmer of Milleens, Bonane, Kenmare, and John Skilling, a lecturer of Tresawson, Kenmare, and 15 other riverbank farm owners and locals and the South Western Fisheries Board had objected to the scheme.

They appealed An Bord Pleanála’s September 2011 decision to the Circuit Civil Court on grounds there had not been a proper environmental impact assessment (EIA) and that the scheme breached the council’s procedures and duties as well as an EU water framework directive.

Shay Roche, for the local authority, had told an earlier hearing that there was pressure on the Kenmare supply scheme under which there was an existing daily water availability of 2,000cubic metres.

Long-term needs had been assessed at 4,500 cubic metres a day and a study during the property boom suggested an existing extraction from Lough Eirk required supplementation from the Sheen river.

The county council had commissioned several reports concerning the project and it had been agreed extraction would reduce or stop during dry spells to preserve the ecological integrity of the river.

Oisín Collins, for the plaintiffs, said the council’s and the bord’s decisions that the development did not require a full EIA had been flawed. The presence of a salmonid habitat, pearl mussels, otters and other protected species was well known.