Jury unable to agree on verdict in Monet damage trial 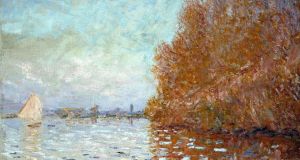 A jury has been discharged after failing to reach a verdict in the trial of a man accused of vandalising a €10 million Claude Monet painting at the National Gallery of Ireland.

Andrew Shannon (48) of Willans Way, Ongar, Dublin 15, pleaded not guilty to causing criminal damage to the painting on June 29tht, 2012. He claimed he felt weak and “collapsed” against the painting because of his heart condition.

After deliberating for just under nine hours, the jury foreman at Dublin Circuit Criminal Court said it had reached a deadlock.

Judge Desmond Hogan thanked the jury of six women and five men for the attention they had given during the course of the trial. He remanded Shannon in custody pending a bail application tomorrow.

Judge Hogan said Mr Shannon was entitled to apply for bail, as he had been in custody for 18 months.

During the trial, the jury saw extensive CCTV footage from the moment Mr Shannon entered the gallery until he was brought out by paramedics a little over half an hour later.

Kerida Naidoo BL, prosecuting, said that Mr Shannon didn’t stop to look at other art work until he got to the room on the first floor where the Monet painting was hanging.

Mr Shannon, who was carrying a can of paint stripper in a plastic bag, is seen on CCTV looking at the Monet, leaving the room, coming back, walking half way around and then cutting across the room diagonally straight towards the painting.

“It has all the hallmarks of a man who is looking for a target and spots it,” said Mr Naidoo.

Two tourists standing a few feet away from the painting said they saw Mr Shannon lunge at the painting with his clenched fist “like a hammer”.

Michael Williams and his wife Dr Toni Ashton were visiting Ireland from New Zealand at the time and travelled back to give evidence at the trial. Mr William said the incident seemed “deliberate” and “planned”.

Mr Shannon told them he had been feeling faint and had collapsed against the painting, but Mr Williams said he felt “he had his excuse ready to go.” He grabbed Mr Shannon’s shoulder and manoeuvred him into the middle of the room “so he couldn’t do any more damage.”

Elline Von Monschaw said the painting was left with several horizontal, vertical and diagonal rips and tears, and that particles of paint had been splattered over a large area of the backing board. She said it was a “big challenge” to repair the painting but that they hope to get it back on public display within a year.

When a security guard saw the damaged painting and said to Mr Shannon, “Jesus, what have you done?”, the accused replied, “I want to get out of here.”

A paramedic who tested Mr Shannon’s vital signs at the scene said his condition seemed “very stable” and gave no cause for concern. Mr Shannon told the medic that he was carrying the can of paint stripper because of his work as a French polisher. An ECG heart test performed on him in an ambulance en route to St James’s Hospital from the gallery was normal. Mr Shannon was arrested immediately after he was discharged from hospital on the day of the incident.

He told gardaí­ he had a “serious heart condition” and had five heart attacks in the last five or six years. He said his heart problems dated back to a car accident 15 years previously when his chest had been crushed. The court heard Mr Shannon had quadruple bypass surgery a year after the incident. Consultant surgeon Nicholas Walcot said he supervised coronary surgery on Mr Shannon last July when he had 90 per cent blockages in all three major vessels of the heart. Asked for his expert opinion on the event in the gallery, Mr Walcot said Mr Shannon getting up and walking away was “a little bit inconsistent”.

He said dizziness was not a symptom of Mr Shannon’s heart condition, and that if he had collapsed, he would have “lost consciousness and stayed down”. Brendan Grehan SC, defending, said it was an “amazing coincidence” that someone who claimed he had a heart episode went on to have a life-saving quadruple bypass a year later.