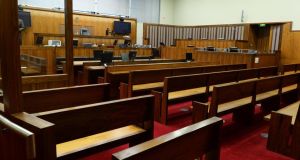 Mr Justice Gerard Hogan in the High Court today directed three dissident republicans must be released “forthwith” after finding the court has no jurisdiction to vary defective warrants under which they are detained. Photograph: Cyril Byrne/The Irish Times

Three dissident republicans convicted of trying to buy weapons and explosives on behalf of the Real IRA are expected to walk free from prison later today after the State lost its High Court bid to keep them in jail until late 2016.

Mr Justice Gerard Hogan directed the three must be released “forthwith” after finding the High Court has no jurisdiction to vary defective warrants under which they are detained. He also refused a stay on his order.

The decision means Fintan O’Farrell, Declan Rafferty and Michael McDonald are likely to be freed within hours. Relatives of the three were in court for his ruling.

The court was previously told the three Co Louth men, who sought arms and financial support from the Iraqi government, were arrested by Slovak police in July 2001 after they had met two agents whom, they believed, were Iraqi arms dealers.

The “dealers” had turned out to be undercover British security agents and, following their arrest, all three were extradited to England where, in 2002, they pleaded guilty at a London court to charges under the UK’s 2000 Terrorism Act, and to conspiracy to cause explosions in London.

The men were initially been given sentences of 30 years, which, on appeal, were reduced to terms of 28 years. All three were transferred to Ireland and are held in the Midlands Prison in Portlaoise, Co Laois.

O’Farrell and Rafferty, both from Carlingford, and McDonald, from Dundalk, had asked the High Court to inquire into the lawfulness of their continued detention in Portlaoise.

Last month, Mr Justice Hogan ruled the warrants detaining the three were defective but refused to release them until the State had an opportunity to apply to vary the warrants. He later heard arguments on whether there was power to vary and reserved judgment on that issue to today.

Michael O’Higgins SC, for the three, had argued they were entitled to immediate release on grounds arising from their transfer from the UK and a recent Supreme Court decision here - in the Sweeney case - directing the release of an Irishman transferred here from jail in England arising from significant differences between the sentencing regimes here and in England/Wales.

In his judgment on the case of the three men last month, Mr Justice Hogan said the British sentencing system involved a legal entitlement to automatic release after service of two-thirds of the sentence and that went to the legal nature of the sentence imposed by the English judiciary. In contrast, the Irish system of remission, normally one quarter, was fundamentally a matter of administration of the sentence by the executive of the receiving State.

The Supreme Court had noted the relevant laws on the transfer of prisoners envisaged the legal effect of the sentence was to be governed by the law of the sentencing State and, in this case, that was the law of England and Wales. The effect of the Sweeney decision meant the description of the sentences in the warrants detaining the men as of 28 years’ duration was defective and could not stand.

Having gone on to consider whether there was power to have the defective warrant amended, the judge today said he had concluded the High Court had no power to correct the warrant. In those and other circumstances, the men must be freed.