Ruling comes after Dutch skipper challenged forfeiture of catch and gear worth €399,000 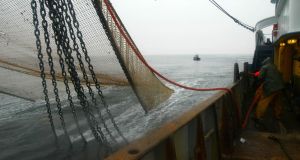 The CJEU said the persistently high number of serious infringements of the rules of the EU Common Fisheries Policy within EU waters was largely due to the non-deterrent level of sanctions. Photograph: European Commission Audiovisual Library

Irish legislation which penalises boat owners engaged in illegal fishing by getting them to forfeit illegal catches and fishing equipment is not incompatible with EU legislation, according to the EU’s top court.

The Court of Justice of the European Union (CJEU) has ruled that Ireland is entitled to have legislation which imposes such sanctions on vessels convicted of illegal fishing offences.

The ruling following a referral to the Luxembourg-based court by the Court of Appeal in Dublin after a Dutch skipper challenged a fine of €500 as well as the forfeiture of a catch worth €344,000 and equipment valued at €55,000 imposed by Cork Circuit Criminal Court in June 2015.

The skipper’s UK-registered vessel was intercepted by the Irish Naval Service vessel LE Samuel Beckett on February 11th, 2015 during a sea fisheries protection patrol and escorted to Cork Harbour.

It was found to have been engaging in the banned activity of “high grading” which involves selecting the best catch and discarding smaller, less profitable and already dead fish back into the sea.

Lawyers for the Dutch skipper claimed the penalties imposed by the Irish courts were disproportionate on the basis it was his first conviction.

They also argued that the Sea Fisheries and Maritime Jurisdiction Act 2006 is incompatible with EU legislation and the regulation of fishing exploitation is an exclusive role of the EU rather than national governments.

However, the CJEU said the persistently high number of serious infringements of the rules of the EU Common Fisheries Policy within EU waters was largely due to the non-deterrent level of sanctions and the wide variation in penalties among many EU member states.

The court said EU regulations left the choice of sanctions to the discretion of member states so long as they were commensurate with the seriousness of the breaches.

It claimed the forfeiture of illegal catches had the effect of depriving offenders of an undue economic benefit from their infringements which a fine alone could not ensure.

The court noted the maximum fine that the Irish courts could impose was between €10,000 and €35,000 depending on the size of the vessel.

It observed that such fines on their own “would be neither effective nor dissuasive”.