Woman whose tongue was damaged by dentist awarded €88,000 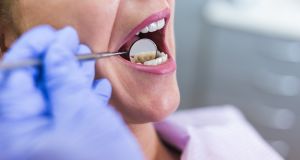 Liability was accepted by the dentist who issued a formal letter of apology in which she sincerely apologised for the injury suffered. Photograph: iStock

A woman with a dental phobia who suffered a deep laceration to her tongue as a dentist was repairing a filling has been awarded €88,000 damages by the High Court.

Mairead Molly O’Brien has been left with a 2cm square patch of nerve damage and a burning tingling sensation which, Mr Justice Anthony Barr said, she apparently will have to learn to live with for the rest of her life.

In particular, she finds kissing in the ordinary way “somewhat unpleasant”, he said.

Mr Justice Barr said Ms O’Brien suffered a very painful and frightening experience as a result of the treatment she received in April 2016. She suffered a deep laceration when one of the instruments, most probably a polishing disc, came into contact with her tongue.

Liability was accepted by the dentist who issued a formal letter of apology in which she sincerely apologised for the injury suffered and acknowledged that her response to the injury had caused Ms O’Brien upset.

Having watched and listened carefully to Ms O’Brien give her evidence, and having had regard to the evidence of her treating doctors and the documentary evidnce, he was “entirely satisfied” she had given a truthful account of her injuries and of her recovery to date.

“I am satsified she has not in any way tried to exaggerate either her initital symptoms or her continuing difficulties.”

He accepted Ms O’Brien has a continuing dental phobia.

In an assessment as to whether she would be a person who would require sedation prior to receiving dental treatment, she achieved a very high score.

Ms O’Brien had said in evidence she was in immediate excruciating pain after the incident and there was a considerable amount of blood.

Ms O’Brien had also said the dentist was “somewhat dismissive of the injury” and sutured the lacertation under anaesthetic.

When asked for an apology, the judge said it was proferred by the dentist and a suggestion was made at one stage Ms O’Brien should suck on a piece of ice and that would relieve her pain “and keep her quiet”.

As the anaesthetic wore off, the pain became more severe and she later had to go to hospital and was prescribed medication. She later complained of severe pain in her tongue which lasted just over a week.

The woman, Mr Justice Barr said, felt particularly aggrieved that no apology was forthcoming immediately after the incident until she specifically asked the dentist for one and that overall at the time, she felt her treatment by the dentist made her feel very belittled.

The judge said, whatever about the initial reaction by the dentist, credit has to be given for the way in which both the dentist and the owner of the dental practice subsequently reacted to the incident.

He said Ms O Brien accepted in cross-examination the dentist had tried to phone her when she was in hospital.

These actions showed both a compassion towards Ms O’Brien and her welfare and were in accordance with best medical practice in relation to how medical professionals should deal with things that go wrong in the course of treatment given by them, he added.