Hotel pleaded the bride, by throwing the bouquet, was the ‘wrongdoer’ and case should have been brought against her 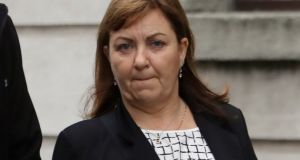 A woman who claims she slipped on petals on a hotel dance floor two hours after the bride threw her bouquet at a wedding reception has sued for damages.

Ann White told the High Court she fell on the dance floor when attending the afters of a work colleague’s wedding reception at the Aherlow House Hotel, Co Tipperary, and fractured her wrist and arm.

The 53-year old childcare worker told Mr Justice Kevin Cross there was a “serious scrum” of about twenty single girls when the bride threw her bouquet at 12.30am.

A number of hands pulled at the bouquet of pink and white roses and there were petals all over the dance floor.

Ms White said she got up on the dance floor at about 2.30am and her right foot skidded.

She said she looked down and saw rose petals.

A friend went to grab her but she had a “massive skid” with the left foot, fell backwards, hit her head off the floor and heard a crack, she said.

She said she skidded on rose petals.

While she was wearing stilettoes, they were normal heels for age 50 plus, she said.

The bride and groom came to her assistance, she added.

Ms White, Highfield Grove,Clonmel, has sued Aherlow House Hotel Ltd, with offices at Limerick city, over the accident in the hotel six years ago.

She has further claimed that hazardous material was permitted to be on the floor and failure to take any or any adequate care of visitors to the premises.

The claims are denied and Aidan Doyle SC, for Ms White, said a full defence had been lodged in which the hotel pleaded the incident was an unfortunate accident and not foreseeable.

The hotel had pleaded the bride, by throwing the bouquet, was the “wrongdoer” and the case should have been brought against her, he added.

Counsel said Ms White is not suggesting the bride is the wrongdoer and her case is there was a varnished floor which had petals on it for one to two hours.

After the fall, she was transferred by ambulance to hospital, had surgery to her arm, was in plaster of paris for seven weeks and has been told she has to live with a pain syndrome.

“My arm is painful every day. I find it hard to dry my hair and I can’t wear jewellery on my left hand,” she said.

She used to love to knit for her grandchildren but can’t do that now, she added.

When Jeremy Maher SC, for the hotel, put to Ms White she was not half as badly injured as she claimed, she replied: “You are wrong, the pain I have is real. It is there every single day.”

The case before Mr Justice Kevin Cross continues on Thursday.