Number of reasons for adverse credibility finding against woman were ‘flawed’ 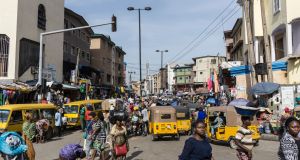 The woman sought asylum due to fears of persecution, as the widow of a leader of an anti-government militia, if she returned to Nigeria. Photograph: Getty Images

A woman who claimed her husband was shot dead by pro-government supporters in Nigeria some years ago has won her appeal over being refused refugee status.

The three judge Court of Appeal unanimously ruled the Refugee Appeals Tribunal breached the woman’s right to fair procedures in how it reached adverse findings about her personal credibility.

She came here some months after her husband’s death more than 10 years ago but did not apply for asylum for another four years.

After being arrested by gardaí over her failure to produce identification documents, she sought asylum on the grounds of a well-founded fear of persecution, as the widow of a leader of an anti-government militia, if returned to Nigeria.

The Office of the Refugee Applications Commissioner refused refugee status and, because of her four year delay seeking the status, she was entitled to a “papers-only” appeal before the tribunal, not an oral hearing.

She argued the tribunal was obliged to take particular care as she had no opportunity to respond to concerns in the mind of the tribunal member.

After the High Court dismissed her judicial review proceedings over the tribunal’s adverse credibility findings, she appealed.

Allowing the appeal, Mr Justice Michael Peart said a number of reasons for the adverse credibility finding were “flawed” because they were based on matters of concern to the tribunal, which the woman was given no opportunity to address and which were “material” to her case and her credibility.

These included the tribunal’s failure to consider a newspaper article which, if authentic, provided “powerful evidence” of the correctness of her claim her husband was a leader of an anti-government group who was murdered.

The judge was also concerned the tribunal raised issues about the woman not having produced a marriage certificate when she had not been asked to do so and it had never been suggested she was not married to the murdered man.

He was also concerned questions about the authenticity of a death certificate for the husband were never put to her before the tribunal, in its decision, expressed concerns about that certificate, including it being dated the same date as the killing.

That issue should have been put to the woman before the tribunal decided her account was not credible, he said.

It was “curious” that, until the hearing of this appeal, neither the woman, the commissioner, the tribunal, nor any of the lawyers involved in the case appeared to have noticed the death certificate, shown to the court, had described the primary cause of death as “haemorrhage/gunshot”, he noted.

After the tribunal indicated a concern that the certificate did not indicate the cause of the haemorrhage and therefore did not corrorobrate the woman’s claim he had been shot, solicitors for the woman replied that it was asserted the haemorrhage and heart failure stemmed from the shooting and the certificate did not indicate the reasons why those conditions occurred.

The reference to “gunshot” on the certificate was “clearly relevant” to the credibility of the woman’s case as it was corroborative of her claim her husband was shot and gave rise to her own well-founded fear of persecution if returned to Nigeria, the judge said.