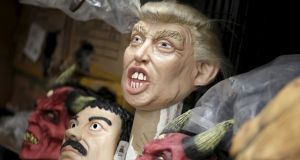 Dr Declan Gill wore a Donald Trump mask to work at the Rosderra Irish Meats plant in Roscrea, Co Tipperary, ‘as a joke’ the day after the US president’s election

A vet was removed from inspection duties by the Department of Agriculture after he wore a Donald Trump mask to work “as a joke” the day after the US president’s election, the High Court heard.

Dr Declan Gill, Newgarden, Castleconnell, Co Limerick, was given leave to challenge the department’s decision removing him from all temporary veterinary panels which oversee the slaughter of animals at meat plants.

Mairéad McKenna BL, for Dr Gill, said the February 20th decision arose out of an incident on November 9th last when her client went to work at the Rosderra Irish Meats plant in Roscrea, Co Tipperary, where he been a temporary inspector since 1998.

Ms McKenna said he was wearing a Donald Trump mask and when he met the plant’s human resources director, Tony Delaney, he gave him the Donald “thump” in a joking manner.

Mr Delaney alleges Dr Gill approached him with a mask on and threatened him with a closed fist with the words “you’re dead”, which he found intimidating.

Arising out of this, the meat plant sought to have Dr Gill removed from the inspection panel and, following consideration of the incident, a decision group recommended his removal with immediate effect last February.

Ms McKenna said he had not been afforded fair procedures.

Although he was not an employee of the plant, he is entitled to employment rights afforded to all workers, counsel said.

His main income comes from being a veterinary inspector, she said.

In a direct response to Mr Delaney’s complaint, Dr Gill’s lawyers denied he was guilty of any wrongdoing.

In a letter last February, his lawyers said he wore the Trump mask while he walked along the production line where it was then removed. That was done as a joke for the purpose of entertaining his colleagues at the plant, the solicitors said.

Dr Gill had worn a Barack Obama mask in the plant eight years earlier and no issue was taken with it, it was also stated. Mr Delaney’s safety, or that of other staff was not at risk, his solicitors said.

In an affidavit, Dr Gill said he was in 2010 involved in a workplace accident at the plant which left him seriously injured. He later issued personal injury proceedings against the plant.

He said, on his return to work in 2013, Mr Delaney told him he believed he was lying and he should withdraw his personal injuries case. He believed Mr Delaney and Rosderra Meats hold prejudicial attitudes and opinions and clearly did not wish him to remain rostered as an inspector at Rosderra Meats, he said.

Mr Delaney had in 2015 alleged Dr Gill had failed to comply with the plant’s hygiene policy and had also said a grievance had been lodged against Dr Gill by another member of staff, he said. He denies the allegations.

An inquiry was begun into those complaints.

He was injured in an incident not related to Rosderra Meats on February 22nd, 2016, and was on extended leave until October.

In the meantime, during August 2016, he says a number of other allegations were made, including that he had intimidated other members of staff. He denied those claims.

In the run up to the “Trump incident”, he was also issued with three notifications by department supervising vets in relation to alleged failures to visually inspect animal carcasses.

He believes Mr Delaney has been committed to securing his removal from Rosderra Meats, he said. An oral hearing into the charges against him was sought and refused and was absolutely essential to vindicate his right to fair procedure, he said.

Mr Justice Seamus Noonan granted the ex-parte application (one side only represented) for leave to bring judicial review proceedings and also granted an injunction preventing the department removing Dr Gill from his post. The matter comes back to court next month.