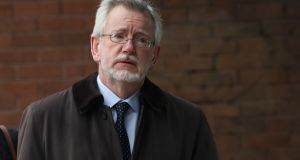 The president of the High Court has fixed next Wednesday to hear an “urgent” application by the Law Society for orders freezing personal accounts of suspended solicitor Declan O’Callaghan and of his former practice below €1.062m.

Orders will also be sought to freeze accounts of, and effectively wind up, the former practice, Kilraine O’Callaghan, at Pound Street, Ballaghaderreen, Co Roscommon.

On Friday, Mr Justice Peter Kelly was due to deal with the Society’s application to join Aoife and Eimear O’Callaghan, solicitors and daughters of Mr O’Callaghan, as co-respondents in relation to the orders sought concerning the practice. They oppose that application.

The Society has stressed no dishonesty is being alleged against the daughters and it is not contending the deficit on the client account of the practice is attributable to them.

The Society is alleging dishonesty against Mr O’Callaghan himself and fears the client account deficit may exceed €730,000.

On Friday, Nessa Bird, for the Society, said, because the daughters became partners in Kilraine O’Callaghan last month, it is necessary to join them as co-respondents to the Society’s “serious and urgent” application.

Ms Bird said, before the daughters became partners, the Society’s Regulation of Practice Committee had told them freezing orders may be sought over the practice and they were strongly advised to get independent legal representation.

The daughters were represented in court on Friday by solicitor Sean Sexton who got time to file replying affidavits.

Mr Sexton said he wanted to stress there is no imputation of dishonesty or wrongdoing against his clients and they had had to become partners in the firm to ensure it would have insurance.

Earlier on Friday, Mr Justice Kelly told the sides he had received certain documents from the High Court probate officer and was giving those to the sides to consider.

Having read the documents, Ms Bird said she was “alarmed” as they appeared to amount to contempt of orders made by the court last July suspending Mr O’Callaghan from practising and having any involvement with Kilraine O’Callaghan.

Her concerns included Mr O’Callaghan was described on documents filed last month by Kilraine O’Callaghan as a retired solicitor when he is a solicitor prohibited from practising.

Gabriel Gavigan SC, for Mr O’Callaghan, said his client disputed any contempt and wished to give evidence immediately explaining the situation.

In evidence, Mr O’Callaghan said the probate matter dated back to 2016 when he agreed to act for a widow under a power of attorney in relation to seeking a grant of probate for the relevant estate. The probate office had since sought other documents and they were provided last month by Kilraine O’Callaghan.

It was in his capacity as attorney, not solicitor, he signed documents in his home then filed by Kilraine O’Callaghan. He had not breached the July orders, he said.

In reply to the judge, he agreed the description of him in the documents as a retired solicitor was “not the most accurate”. He said it was put in that way to show he was not practising and agreed he should have given a “more accurate” description but said he did not intend to deceive anyone.

The judge allowed the Law Society time to consider whether to proceed with an application for contempt of the July court orders.

After lunch, Ms Bird said, while the Society remained “deeply dissatisfied” with issues arising from the probate matter, it was conscious of the high threshold for contempt and was not proceeding with a contempt application.

The Society feels Mr O’Callaghan has made a “material misrepresentation” to the probate office by describing himself as a retired solicitor when, as a solicitor and officer of the court, he must have known that was not accurate, she said.

The Society also considered he was “skirting around” the order restraining any involvement with his former practice.

This matter underlined the need for the Society to seek the freezing and other orders, she added.

Mr Justice Kelly said the probate office had “quite rightly” raised concerns and said he would observe evidence in the witness box or via affidavit is sworn testimony. Mr O’Callaghan had admitted in evidence a “retired” solicitor was “not the most accurate” description of himself when his actual status is suspended solicitor, he noted.

Because the Society is not proceeding further with that matter, he would “say no more”, the judge said.