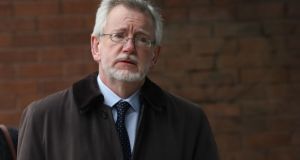 A suspended solicitor has consented to High Court orders freezing his accounts below €1.062m, plus orders effectively aimed at winding up his former practice at Ballaghaderreen, Co Roscommon.

Declan O’Callaghan will be entitled to vouched monthly living expenses of €11,600, the president of the High Court, Mr Justice Peter Kelly also directed.

That sum was agreed between the solicitor and the Law Society and includes mortgage repayments.

The consent orders also provide Mr O’Callaghan will remain suspended from practice and must provide a sworn statement of his assets.

They also provide for steps to achieve sale of three properties – his family home in Ballaghderreen, a townhouse in Portugal and a property at Arran Quay, Dublin - with the proceeds going towards clearing the deficit on the account of the Kilraine O’Callaghan practice at Pound Street, Ballaghderreen.

A sum of €107,816 is also to be paid out on Thursday to a law firm related to certain litigation and the orders provide for handover on Friday of files of the practice to the Society and for it to have access to the practice from then.

In making the orders, Mr Justice Kelly noted the Society alleges dishonesty against Mr O’Callaghan while he has consistently denied any dishonesty.

That issue will be adjudicated on in due course by the Solicitors Disciplinary Tribunal (SDT) and is not before the court in this application, he said.

The Society, he noted, has made two referrals to the SDT of issues concerning Mr O’Callaghan’s practice and it seemed a third referral is likely arising from further investigation reports.

It was “important” the court makes clear Mr O’Callaghan has asserted at all times he has conducted himself honestly, had at all times sought to act in the best interests of the clients of his firm and intends to personally make good any shortfalls which may be found in the practice and to ensure no client of the practice is at a loss.

It was also important to say the Society is not alleging any dishonesty against Mr O’Callaghan’s daughters Aoife and Eimear O’Callaghan, both solicitors, who were made partners in the practice last month for the purposes of ensuring it remains insured, the judge said.

Earlier on Wednesday, the judge was told by Nessa Bird BL, for the Society, it wanted the freezing and other orders as it is very concerned the deficit on the practice account may be almost €1m and is “increasing and increasing”.

That €1m sum excluded refund by Mr O’Callaghan earlier this year of €344,000 in alleged “exorbitant” fees and costs taken from the estate of a bereaved child, plus his refund to some €80,000 to a widowed mother of three in alleged excessive fees, counsel said.

The Society is very concerned some of the refunded monies appear to have come from the accounts of other clients, she added.

She said inspections of client files disclosed an apparent “pattern” of Mr O’Callaghan taking funds from monies gathered in probate without client authorisation and then subsequently trying to agree costs in relation to the relevant estates.

“That is not the way fees are paid,” she said.

Unless and until fees are agreed and authorised by the relevant client, the monies were not the solicitor’s and this involved the “dishonest taking” of client funds.

She said the Society previously referred to a €600,000 deficit on the client account but there was very serious concern of a further deficit on some €320,000 arising from a complaint concerning a client who suffered catastrophic injuries in a road accident and got a €5.2m settlement in 2010. The full balance of those monies was not paid over and the Society was investigating that, she said.

The Society understood special damages were to be paid out of the settlement but a sum of €118,000 to the National Rehabilitation Hospital remained unpaid. There was a further complaint regarding a sum of €16,000 for another client which the client understood had been retained for two years but was no longer held to that client’s account.

Mr O’Callaghan has said the hospital and the €16,000 would be paid, the court was told.

Other concerns were the solicitor drew fees of some €74,000 from a man’s estate “way in excess” of a three per cent charge referred to as well as in excess of his solicitor’s attendance note estimating costs at €40,000.

Ms Bird said the Alzheimer Society, the sole beneficiary of a deceased woman’s estate, was told by the solicitor the residuary estate amounted to €35,000 but was not told he had taken costs of €34,000. The Alzheimer Society has been reimbursed €24,600, counsel said.

After talks between the sides, the judge was told Mr O’Callaghan and his daughters were consenting to various orders.

His counsel Gabriel Gavigan SC said Mr O’Callaghan had paid a further €144,000 towards clearing the deficit, bringing to some €671,000 paid by him to date.

Mr O’Callaghan is determined to honour his undertaking to ensure no client of the practice will be at a loss, counsel said.

Sean Sexton, solicitor for the daughters, reiterated there is no allegations of dishonesty against them and they are fully co-operating with the Society.

1 Covid-19: Easing of restrictions ‘unlikely’ to be speeded-up
2 Trump turns to bible for photo op as DC burns around him
3 ‘Frustrated and angry’: Thousands march in Dublin to protest death of George Floyd
4 Body of missing five-year-old recovered from Lough Mask, Co Mayo
5 Coronavirus: Increase in legal queries from 'stressed' workers
Real news has value SUBSCRIBE