Newspaper apologises in settlement of action over article about €7.6m ‘tiger’ kidnapping 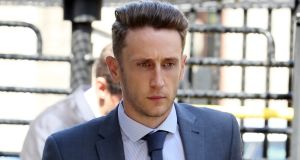 The damages to be paid to Shane Travers (31), of Ardilaun Park, Portmarnock, Co Dublin, are understood to be substantial. Photograph:Collins Courts

The Sunday World has apologised and agreed to pay undisclosed damages, to a Bank of Ireland employee under a settlement of his legal action alleging defamation in an article concerning a €7.6m ‘tiger’ kidnapping heist in Dublin.

The damages to be paid to Shane Travers are understood to be substantial. The newspaper accepted he was a “wholly innocent victim” of the kidnappers subjected to a “terrifying ordeal” when he and his then girlfriend Stephanie Smith’s family were apprehended by a violent criminal gang.

In High Court proceedings, Mr Travers (31), of Portmarnock, Co Dublin, sued Sunday Newspapers Ltd, publishers of the Sunday World, which denied it defamed him in the article of January 31st 2010. It was headlined “€7.6m heist ‘was nothing to do with me’” with a sub-heading: “But gardaí still convinced kidnap gang had inside info on bank stash”.

The article was published within hours of Mr Travers’s release without charge on January 30th 2010 after being questioned by gardai for 48 hours about the heist at the Bank of Ireland cash centre, College Green, of February 26th/27th 2009.

The article was accompanied by photos of Mr Travers standing beside a Ferrari and Bentley, which the court was told were taken when he and Ms Smith were on holiday in Spain prior to the heist.

Mr Travers had been working at the BOI cash centre for some two years before the heist occurred. He remains a paid employee of BOI but has been incapable of returng to work since the heist, he told the jury.

The case opened last week and evidence on behalf of Mr Travers concluded on Friday.

On Tuesday morning, Mr Justice Colm MacEochaidh was told the newspaper was not calling evidence and, just after lunch, Paul O’Higgins SC, with Jim O’Callaghan SC, for Mr Travers, said the case had settled.

In its apology read by Eoin McCullough SC to the judge and jury, the newspaper said it published an article which “has been said to allege that Shane Travers had been part of a serious criminal gang that had been responsible for a €7.6m Tiger kidnapping raid on the Bank of Ireland in February 2009”.

The Sunday World “unreservedly accepts that Shane Travers did not participate in any way whatsoever in this serious crime” and “was a wholly innocent victim of the Tiger kidnappers who was subject to a terrifying ordeal when he and his then girlfriend’s family were apprehended by a violent criminal gang”, it said.

The newspaper apologised to Mr Travers for the article and said it has agreed to pay damages for damage and distress caused to him and his family.

Mr Travers, accompanied by his father Jesse, who is a serving Garda, mother Jill and several family members and friends were in court. Mrs Travers wept as the apology was read.

In his evidence, Mr Travers said armed and masked men held himself, Ms Smith, her mother and her young nephew at gunpoint overnight at her home at Kilteel, near Naas, on February 26th/27th 2009. He said he was warned there would be “blood on your hands” unless he obeyed instructions to drive to work next day, take €7.6m cash and drive to Clontarf Dart station where he was approached by a man who drove off with his car and the cash.

Ms Smith told the jury she, her mother and nephew were driven away from Kilteel that morning and left tied up in an abandoned van from which they eventually managed to free themselves.

The Sunday World article stated gardai had within 24 hours of the raid recovered an estimated €4m and two men had been charged in connection with the heist.