Solicitor should be struck off over ‘fictitious’ land sale contract, judge rules 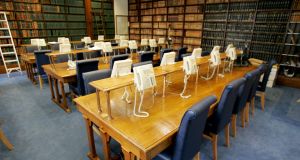 The Law Society was entitled to a strike off order against Daniel J Coleman on foot of misconduct concerning a conveyancing transaction, Mr Justice Garrett Simons ruled. Photograph: David Sleator

A High Court judge has ruled a solicitor should be struck off the roll of solicitors for professional misconduct over a land sale.

Daniel J Coleman was found by the Solicitors Disciplinary Tribunal to have caused or allowed a “fictitious” contract regarding a 2004 land sale in Tuam, Co Galway, come into existence to mislead a bank into advancing monies to a development firm.

The Law Society was entitled to a strike off order against Mr Coleman on foot of misconduct concerning the conveyancing transaction, Mr Justice Garrett Simons ruled.

A second finding of misconduct concerning alleged breach of an undertaking given by the solicitor in 2004 to St Jarlath’s credit union in Tuam was legally unsustainable and must be set aside, he found.

Mr Coleman was admitted to the roll of solicitors in 1998 and practised as principal in the firm of Coleman & Company Solicitors, Main Street, Ballinrobe, Co Mayo.

He opposed the society’s strike off application arising from findings of the tribunal in 2010 of professional misconduct concerning separate complaints by two former clients.

Mr Justice Simons earlier this year refused the solicitor an extension of time to bring a separate statutory appeal against the SDT findings.

The first complaint related to sale of part of a housing site in Tuam and the tribunal found that Mr Coleman had forged the signature of another solicitor on a 2004 sale contract and acted for both the seller and the purchaser in contravention of solicitors regulations.

The only explanation offered by counsel on behalf of Mr Coleman at the tribunal was to “blame the Celtic Tiger for the lack of attention to detail” and the lowering of standards generally, counsel for the society said.

On the second complaint, the tribunal found misconduct in that Mr Coleman failed to comply with an undertaking relating to holding title deeds for another property allegedly leading to loss for the credit union.

In 2010, then High Court president Mr Justice Nicholas Kearns refused Mr Coleman’s request to adjourn the strike off application so he could get legal representation and made a strike off order after saying he was satisfied Mr Coleman was “well aware” of all the developments which led to the tribunal’s findings. He also granted the society an order directing Mr Coleman to pay €320,000 restitution to the credit union.

The Supreme Court ruled in 2018 the adjournment refusal breached fair procedures, quashed the strike off and restitution orders, and directed a fresh High Court hearing.

In his judgment this week, Mr Justice Simons concluded the society was entitled to strike off arising from the solicitor’s handling of the 2004 conveyancing transaction.

He said a condition for the release of monies by ACC Bank to the development firm was that the solicitor confirm in writing that “unconditional and irrevocable” contracts with deposits paid were in place.

Mr Coleman had said in an affidavit of June 2009 he had sent a letter to ACC advising the development had been sold “but, in truth, there was no unconditional irrevocable contract in place at that time”, the judge said.

Mr Coleman’s conduct in this matter was dishonest, rather than merely negligent or careless, and involved “a cavalier disregard” of the importance of ensuring contracts for sale are properly executed and can be relied upon by all parties.

While mitigating factors included ACC had not suffered loss as the lands were later sold and its loan paid off , and Mr Coleman initially co-operated in disciplinary proceedings, a strike off order was necessary to advance the public interest in ensuring the integrity of the solicitors profession is maintained, he held. The solicitor’s personal circumstances, including serious health issues affecting close family members, does not ameliorate the gravity of his misconduct, he added.

Earlier, he noted Mr Coleman had during the tribunal hearing in 2010 effectively made various admissions of fact, did not seriously contest the conduct admitted to professional misconduct and relied on his co-operation in the disciplinary process and his personal and family circumstances in support of a plea of leniency.

However, in this hearing, Mr Coleman had disputed all findings of misconduct against him. While accepting he put another solicitor’s name on the 2004 contract without authority, he said that was done in the honest but mistaken belief he had authority from the other solicitor to sign his name. He also denied the sale contract was fictitious and said it was ultimately completed.

Mr Coleman was bound by his admissions of fact made before the tribunal concerning the 2004 conveyancing transaction and, in doing so, was admitting professional misconduct, the judge held. He also rejected claims of unfairness in the hearing before the tribunal.

Formal orders will be made on a later date.