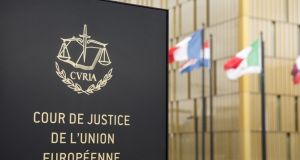 Friends of the Irish Environment sought a preliminary reference to the Court of Justice of the EU. Photograph: iStock

A High Court judge has refused to ask the Court of Justice of the EU (CJEU) to decide whether the European Commission’s inclusion of the proposed €500 million Shannon LNG project in a list of EU Projects of Common Interest (PCI) was valid.

Additional issues in an action by Friends of the Irish Environment, particularly issues under the Climate Action and Low Carbon Development Act 2015, will be fixed for hearing on a later date. Those include whether the State conducted any, or any adequate, sustainability assessment before approving the Shannon terminal and pipeline project for the PCI list.

Friends of the Irish Environment sought a preliminary reference to the Court of Justice of the EU as a core relief in its case focusing on the decision-making procedure involving the Commission and the State which lead to the Shannon project being included in the 4th EU PCI list, entitling it to the “most rapid treatment legally possible”.

Friends of the Irish Environment’s case was brought against the Minister for Communications, Climate Action and the Environment and the State. The Commission opted not to participate.

Prior to deciding other issues, Friends of the Irish Environment asked Mr Justice Garrett Simons to refer issues to the Court of Justice of the EU concerning the validity of a “delegated act” of the Commission on October 31st 2019 approving inclusion of the Shannon project in the PCI list.

In seeking a reference, Friends of the Irish Environment claimed adoption of the 4th EU PCI list made that list an annexe of Regulation 347/2013 of the European Parliament and European Council on guidelines for trans-European energy infrastructure.

The State parties argued the referral sought was impermissible under EU law.

In his judgment, Mr Justice Simons refused to make a reference, saying there was no basis on which the High Court could do so.

The PCI list was adopted by the Commission by way of a delegated regulation and the “fatal flaw” in FIE’s proceedings was that it had been unable to identify any decision or implementing measure at national level which is capable of forming the basis of an action before the High Court, he held.

The issue in controversy is the validity of the delegated regulation and the High Court had no jurisdiction to determine that controversy, he held.

He refused to grant an associated declaration that the Irish State is obliged to provide a “dedicated and suitable” mechanism by which the validity of a decision of the Commission can be raised, irrespective of whether there is also an infringement by the national authorities.

The Irish State’s actions as a member of the regional group, and as the member state upon whose territory the Shannon project is to be located, cannot be viewed in isolation in a way that would render them capable of being reviewed separately from the ultimate decision to adopt the delegated regulation, he said.

The member state’s actions are performed “in advance” of adoption of the delegated regulation and are thus incapable of being challenged independently of the EU measure, he said.

FIE’s solicitor, Fred Logue, had objected to the State’s late disclosure of this information and that a relevant email, from Ireland’s representative at a June 28th 2019 meeting concerning the initial draft ranking list, was not exhibited. It remained unclear why physical isolation criteria, which were previously not validated for the Shannon project and Ireland, had become accepted as validated, Mr Logue complained.