Settlement may be reached next week in Quinn children case 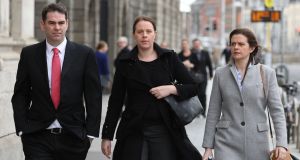 Sean Quinn’s children, Sean jnr, Aoife and Brenda, at the Four Courts where their action against IBRC has now been deferred to allow for talks between the parties. Photograph: Collins Courts

A settlement could be reached next week of the marathon case by Sean Quinn’s five adult children challenging the validity of securities provided by them for hundreds of millions of loans advanced by Anglo Irish Bank to Quinn companies.

The five dispute claims they are liable for some €410 million, €82 million each, under guarantees.

Settlement talks began late last week after the Quinns sought to be permitted to advance a key claim that their father unduly influenced them to sign the securities and “effectively dictated” to them about the lending.

Mr Justice Garrett Simons’s ruling on Wednesday preventing them from advancing that claim represented a setback for their case, following from an even more significant setback in 2015 when the Supreme Court prevented them from bringing forward claims the Anglo loans were unenforceable on grounds those loans were illegally made for the purpose of propping up the bank’s share price.

After this week’s ruling, the judge was told that talks were continuing between the sides and he adjourned the hearing to facilitate them.

On Friday he was told by Bernard Dunleavy SC, for the Quinns, the “progress” made to date had continued and he wanted the matter put back to Tuesday. Counsel indicated the case would either be settled by then or would continue.

The judge granted that adjournment and said, if the sides wanted to report any developments in the interim, they could contact his judicial assistant.

Earlier on Friday, the separate case by IBRC alleging various Quinn family members and a number of companies have conspired to put some €455 million assets in the Quinn international property group beyond the bank’s reach was mentioned before another High Court judge.

Mr Justice Robert Haughton was asked by Barry O’Donnell SC, for IBRC, to adjourn a directions motion due to the continuing “intensive” discussions in the children’s separate case. The judge agreed to do so.

In their action, Aoife, Brenda, Ciara, Colette and Sean Quinn jnr have challenged the validity of guarantees and share pledges providing securities for millions of euro of loans advanced to Quinn companies by Anglo Irish Bank

Most of the disputed transactions were entered into as part of the unwinding into Anglo shares of contract for different positions in Anglo built up by Sean Quinn snr via Bazzely, a company beneficially owned by his children.

Their case is against IBRC, into which Anglo was nationalised following its collapse, and a receiver appointed over share charges.

The bank has counterclaimed for €82 million each against the five arising from guarantees for certain loans.

Sean Quinn snr and two former Quinn Group executives – Dara O’Reilly and Liam McCaffrey – have been joined by IBRC as third parties for the purpose of claiming an indemnity against them should the children win their case.

Arising from the bankruptcy of Mr Quinn snr, which he has since exited, IBRC previously got liberty to enter final judgment against him should that situation arise.

Mr McCaffrey and Mr O’Reilly deny they acted as agents for the children concerning the disputed securities and deny any liability.

The case opened earlier this month and today was the 10th day.

More than 150,000 documents were provided for the hearing, which were presented to the court via TrialView, a cloud platform via which lawyers and judges can use their own devices to access all the papers and follow the evidence presented in court.