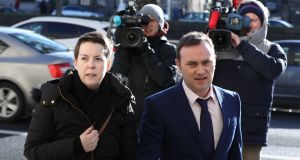 A cervical screening expert who examined a 2009 slide of a woman suing over alleged misreading of her smear tests has told the High Court that some cells on the slide identified as “abnormal”.

Dr Michael McKenna said 95 per cent of the cells on the slide were atypical but some others identified as abnormal with cells showing darker with a staining intensity.

There were single cells which were normal and looked like cornflakes but he could also clearly see a very dark and large group of cells, he said. The darker cells would be a “red flag”.

He was giving evidence in the resumed action by Ruth Morrissey (37) and her husband Paul, of Kylemore, Schoolhouse Road, Monaleen, Co Limerick, over her cervical smears.

In the couple’s action, it is claimed there was failure to correctly report and diagnose and alleged misinterpretation of Ms Morrissey’s smear samples taken in 2009 and 2012.

A situation allegedly developed where Ms Morrissey’s cancer spread unidentified, unmonitored and untreated until she was diagnosed with cervical cancer in June 2014, it is claimed.

A consultant cytopathologist in charge of one of the North’s four laboratories responsible for screening cervical smear tests, Dr McKenna told the court on Wednesday he had last October examined the 2009 slide which had been tested by Quest Diagnostics at its lab in Wyoming.

At even four magnification, he had concluded you would need to go back and have a look and there was a heightened level of awareness, he said.

In the case of atypical cells, the screener would pass it on to the pathologist for further examination, he also said.

He said primary cervical screening should have a high sensitivity for detecting abnormalities and when the sample is being tested, if there is any doubt, it should be passed on to the pathologist.

A negative should only be reported when absolutely certain, he said.

“You don’t want to call something negative when there is uncertainty,” he said.

“You can only have absolute confidence if you know it’s definitely negative. If it is borderline, you can’t call it normal.”

Ms Morrissey, it is claimed, was not told until May 2018 of those review results which showed her smears were reported incorrectly.

The Morrisseys further contend, had she been told the results of the smear test audits in late 2014 or early 2015, she would have insisted on an MRI and other scans.

The HSE has admitted it owed a duty of care to Ms Morrissey but not to her husband. The laboratories deny all claims.

The case continues on Thursday before Mr Justice Kevin Cross.