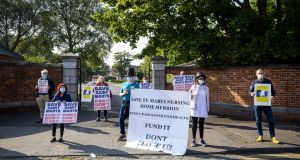 Members of the Save St Mary’s Centre (Telford) campaign group protest earlier this week outside the Religious Sisters of Charity in Sandymount. Photograph: Tom Honan

The High Court will rule on Monday whether an examiner should be appointed to a south Dublin care facility for vulnerable adults.

The application concerns St Mary’s Centre (Telford) which operates a disability care facility for persons who are legally blind and a nursing home on a campus beside St Vincent’s Hospital on Merrion Road.

Last July, the court appointed provisional liquidators to the company.

Lawyers representing the care centre’s residents, some staff and former staff members, subsequently asked that the firm be put into examinership, even for a short period, to see if the facility can be saved.

Those applicants, represented by John Kennedy SC, claim an independent expert’s report has stated the company can be saved if certain steps are taken, including examinership.

The company disputes the business could be saved through the examinership process.

The application to wind up the facility, which is owned by the Sisters of Charity, was brought on grounds it would be unable to meet redundancy payments of €950,000 arising from liquidation.

The firm cited regulatory difficulties, concerns over future funding from the Health Service Executive (HSE) and an inability to comply with Health Information and Quality Authority (Hiqa) recommendations to modernise its facilities as reasons why it should be wound up.

On Friday, the second day of the application before Mr Justice Michael Quinn to appoint Anthony Wheldon as examiner, the court heard all of the residents at St Mary’s nursing home have been relocated.

Eighteen people remain at the care centre, some of whom have been there for 60 years.

Counsel said the applicants had failed to put evidence before the court to address the centre’s significant funding gap.

No potential investor had been identified and there was no likelihood of an investor making a profitable return from the business, he said.

Other parties, including Hiqa and Revenue, are neutral on the examinership application.

Conor Dignam SC, for the HSE, told the court it is in talks about taking over the running of the disability centre from the liquidators for a transitional period of between 12 to 18 months.

During that time period, it is envisaged alternative accommodation could be located for the residents.

The Sisters of Charity, the court heard, were prepared to accommodate that scenario if the HSE and the liquidator’s talks yielded an agreement.

Following the conclusion of submissions on Friday afternoon, Mr Justice Quinn said he would give his decision on Monday whether to appoint an examiner.

Rossa Fanning SC, for the company, said, in the event of the court refusing to appoint an examiner, the company will be asking it to confirm the appointment of the liquidators and make an order winding up the company.